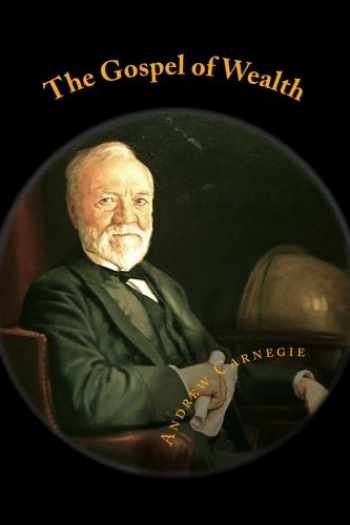 The Gospel of Wealth

Acknowledged authors Carnegie, Andrew wrote The Gospel of Wealth comprising 34 pages back in 2014. Textbook and eTextbook are published under ISBN 150303304X and 9781503033047. Since then The Gospel of Wealth textbook was available to sell back to BooksRun online for the top buyback price of $ 0.30 or rent at the marketplace.
Show more

Andrew Carnegie (November 25, 1835 – August 11, 1919) was a Scottish American industrialist who led the enormous expansion of the American steel industry in the late 19th century. He was also one of the highest profile philanthropists of his era and had given away almost 90 percent – amounting to, in 1919, $350 million (in 2014, $4.76 billion) – of his fortune to charities and foundations by the time of his death. His 1889 article proclaiming "The Gospel of Wealth" called on the rich to use their wealth to improve society, and stimulated a wave of philanthropy. Carnegie was born in Dunfermline, Scotland, and emigrated to the United States with his very poor parents in 1848. Carnegie started as a telegrapher and by the 1860s had investments in railroads, railroad sleeping cars, bridges and oil derricks. He accumulated further wealth as a bond salesman raising money for American enterprise in Europe. He built Pittsburgh's Carnegie Steel Company, which he sold to J.P. Morgan in 1901 for $480 million (in 2014, $13.6 billion), creating the U.S. Steel Corporation. Carnegie devoted the remainder of his life to large-scale philanthropy, with special emphasis on local libraries, world peace, education and scientific research. With the fortune he made from business, he built Carnegie Hall, and founded the Carnegie Corporation of New York, Carnegie Endowment for International Peace, Carnegie Institution for Science, Carnegie Trust for the Universities of Scotland, Carnegie Hero Fund, Carnegie Mellon University and the Carnegie Museums of Pittsburgh, among others. His life has often been referred to as a true "rags to riches" story. Carnegie spent his last years as a philanthropist. From 1901 forward, public attention was turned from the shrewd business acumen which had enabled Carnegie to accumulate such a fortune, to the public-spirited way in which he devoted himself to utilizing it on philanthropic projects. He had written about his views on social subjects and the responsibilities of great wealth in Triumphant Democracy (1886) and Gospel of Wealth (1889). Carnegie bought Skibo Castle in Scotland, and made his home partly there and partly in New York. He then devoted his life to providing the capital for purposes of public interest and social and educational advancement. He was a powerful supporter of the movement for spelling reform as a means of promoting the spread of the English language. Among his many philanthropic efforts, the establishment of public libraries throughout the United States, Britain, Canada and other English-speaking countries was especially prominent. In this special driving interest and project of his he was inspired by a visit and tour he made with Mr. Enoch Pratt (1808-1896), formerly of Massachusetts but who made his fortune in Baltimore and ran his various mercantile and financial businesses very thriftily. Pratt in turn had been inspired and helped by his friend and fellow Bay Stater, George Peabody, (1795-1869) who also had made his fortune in the "Monumental City" of Baltimore before moving to New York and London to expand his empire as the richest man in America before the Civil War.