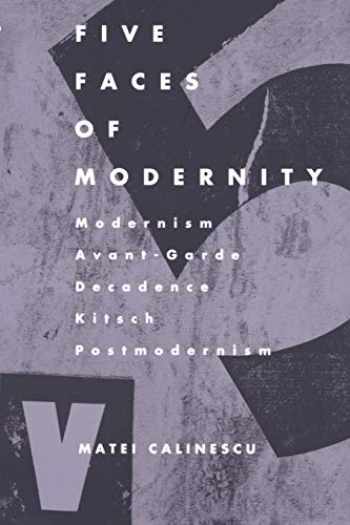 Five Faces of Modernity is a series of semantic and cultural biographies of words that have taken on special significance in the last century and a half or so: modernity, avant-garde, decadence, kitsch, and postmodernism. The concept of modernity—the notion that we, the living, are different and somehow superior to our predecessors and that our civilization is likely to be succeeded by one even superior to ours—is a relatively recent Western invention and one whose time may already have passed, if we believe its postmodern challengers. Calinescu documents the rise of cultural modernity and, in tracing the shifting senses of the five terms under scrutiny, illustrates the intricate value judgments, conflicting orientations, and intellectual paradoxes to which it has given rise.
Five Faces of Modernity attempts to do for the foundations of the modernist critical lexicon what earlier terminological studies have done for such complex categories as classicism, baroque, romanticism, realism, or symbolism and thereby fill a gap in literary scholarship. On another, more ambitious level, Calinescu deals at length with the larger issues, dilemmas, ideological tensions, and perplexities brought about by the assertion of modernity.
Show more