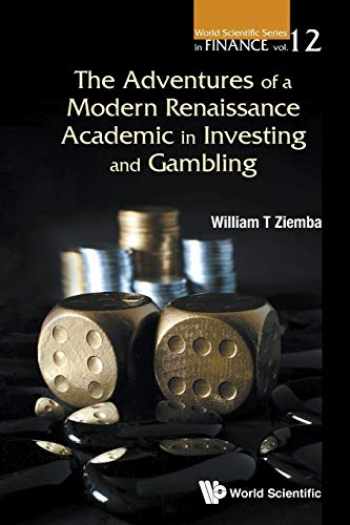 Adventures Of A Modern Renaissance Academic In Investing And Gambling, The (World Scientific Finance)

This book tells the story of how financial markets have evolved over time and became increasingly more complex. The author, a successful and experienced trader, who among other things won the 2015 battle of the quants futures contest held in New York, shares how one can navigate today's dangerous financial markets and be successful. Readers at all levels will benefit from his analysis and many real life examples and experiences. The coverage is broad and there is considerable discussion on ways to stay out of trouble, protect oneself and grow one's assets. The author was the first one to do turn of the year January effect trades in the futures markets starting in the beginning of S&P 500 futures trading in 1982. That has been successful and the author explains his ideas and experiences from the beginning in simple markets to the current, very complex markets we have in 2017.

The author discusses the various ways that traders and investors lose money in the financial markets. Many examples are provided, including Long Term Capital Management, ENRON, Amarath, Neiderhoffer's funds and many major companies such as Lehman Brothers, Society Generale, Saloman Brothers. This is invaluable to understanding ways to avoid such losses.

The author discusses great investors, their methods and evaluation and the authors' work with several of them. Risk arbitrage and mean reversion strategies are described through actual use. Asset-liability models for pension funds, insurance companies and other financial institutions devised by the author are described. The author uses racetrack bias ideas in behavorial finance in trading index futures and options. Large stock market crashes that can be predicted are discussed with several models of the author and others. Many mini crashes including the January-February 2016, Brexit, Trump and French elections that are plausible but largely unpredictable are described and how they were dealt with successfully.

Along with ways to deal with them, investment in top quality racehorses, oriental carpets, real estate and other interesting investments are covered. The author was instrumental in viewing racing as a stock market. The ideas are used by the top racing syndicates as well as hedge funds.

The book proceeds by weaving these aspects of the financial markets in the modern era into a story of the author's academic, professional and personal life. This is told through the people he met and worked with and the academic and personal travel he had all over the world this past half century. The text is simply written with details, sources and references in the notes of each chapter. Details of various important events and how they evolved are described. There are numerous color and black and white photos in the text plus graphs, tables etc. in the notes to tell the story. The teaching and research into various financial and gambling markets takes the reader to interesting places around the world. These include the US and its many stock market ups and downs, Japan when they were ruling the financial world and then they collapsed, the UK visits with lectures, teaching and research work at their great Universities including Cambridge and Oxford, Europe with many activities in France, Italy, Germany and other places, to Asia including discussions about travels to Persia, Turkey, Singapore, Korea, China, Afghanistan, Russia and other countries. Also discussed are visits to U.S. universities including Chicago, MIT, Berkeley, UCLA and Washington. His work with horse racing syndicates took him to Australia and Hong Kong. Crises like those in Greece, US housing and internet and the flash crash are discussed.

Readership: Investors, financial experts and researchers in the fields of finance and investments.