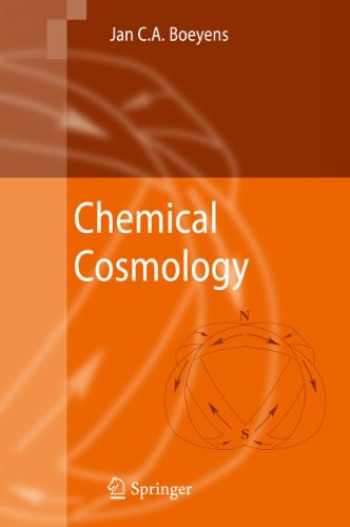 Acknowledged authors Boeyens, Jan C. A. wrote Chemical Cosmology comprising 436 pages back in 2010. Textbook and eTextbook are published under ISBN 9048138272 and 9789048138272. Since then Chemical Cosmology textbook was available to sell back to BooksRun online for the top buyback price or rent at the marketplace.
Show more

The composition of the most remote objects brought into view by the Hubble telescope can no longer be reconciled with the nucleogenesis of standard cosmology and the alternative explanation, in terms of the Λ-Cold-Dark-Matter model, has no recognizable chemical basis. A more rational scheme, based on the chemistry and periodicity of atomic matter, opens up an exciting new interpretation of the cosmos in terms of projective geometry and general relativity.

The response of atomic structure to environmental pressure predicts non-Doppler cosmical redshifts and equilibrium nucleogenesis by α-particle addition, in accord with observed periodic variation of nuclear abundance.

Inferred cosmic self similarity elucidates the Bode –Titius law, general commensurability in the solar system and the occurrence of quantum phenomena on a cosmic scale.

The generalized periodic function involves both matter and anti-matter in an involuted mapping to a closed projective plane. This topology ensures the same symmetrical balance in a chiral universe, wrapped around an achiral vacuum interface, without singularities.

A new cosmology emerges, based on the theory of projective relativity, presented here as a translation of Veblen’s original German text. Not only does it provide a unification of gravity, electromagnetism and quantum theory, through gauge invariance, but also supports the solution of the gravitational field equations, obtained by Gödel for a rotating universe.

The appearance of an Einstein–Rosen bridge as outlet from a black hole, into conjugate anti-space, accounts for globular clusters, quasars, cosmic radiation, γ-ray bursters, pulsars, radio sources and other regions of plasma activity.

The effects of a multiply-connected space-time manifold on observations in an Euclidean tangent space are unpredictable and a complete re-assessment of the size and structure of the universe is indicated.

The target readership includes scientists, as well as non-scientists – everybody with a scientific or philosophical interest in cosmology and, especially those cosmologists and mathematicians with the ability to recast the crude ideas presented here into appropriate mathematical models.