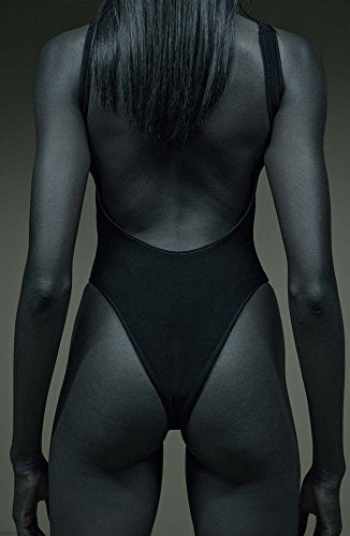 Kanye West: YEEZY Season 3–4 Zine showcases the third and fourth collections of Kanye West’s YEEZY footwear, apparel and accessories line, both presented in 2016. Dark, atmospheric photographs by Jackie Nickerson make up a purely visual work, devoid of any text. YEEZY Season 3–4 Zine is emphatically not a lookbook; the clothes are photographed in lush, tactile close-ups, but bodies receive the same treatment. Some of West’s trusted collaborators and muses make appearances, including Teyana Taylor, Playboi Carti, Luka Sabbat and Amina Blue.

YEEZY Season 3–4 Zine is an incredible object, printed in an oversized format on rough, uncoated Kamiko paper with intensely black inks. It is the third installment of YEEZY’s limited-edition season zines, all collaborations between West and Nickerson.

Kanye West (born 1977) is a musician, artist, producer and designer. He has been named twice by Time magazine as one of the 100 most influential people in the world.

Jackie Nickerson (born 1960) is a conceptual documentary photographer. Her books include Farm (2002), Faith (2008) and Terrain (2013), and in 2008 she was awarded the AIB art prize. Nickerson’s work has been exhibited internationally at institutions including the National Gallery of Ireland in Dublin, the National Portrait Gallery in London and the Santa Barbara Museum of Art.