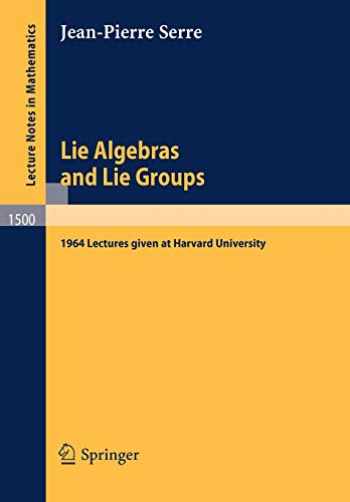 The main general theorems on Lie Algebras are covered, roughly the content of Bourbaki's Chapter I. I have added some results on free Lie algebras, which are useful, both for Lie's theory itself (Campbell-Hausdorff formula) and for applications to pro-Jrgroups. of time prevented me from including the more precise theory of Lack semisimple Lie algebras (roots, weights, etc.); but, at least, I have given, as a last Chapter, the typical case ofal,.. This part has been written with the help of F.Raggi and J.Tate. I want to thank them, and also Sue Golan, who did the typing for both parts. Jean-Pierre Serre Harvard, Fall 1964 Chapter I. Lie Algebras: Definition and Examples Let Ie be a commutativering with unit element, and let A be a k-module, then A is said to be a Ie-algebra if there is given a k-bilinear map A x A~ A (i.e., a k-homomorphism A0" A -+ A). As usual we may define left, right and two-sided ideals and therefore quo tients. Definition 1. A Lie algebra over Ie isan algebrawith the following properties: 1). The map A0i A -+ A admits a factorization A ®i A -+ A2A -+ A i.e., ifwe denote the imageof(x,y) under this map by [x,y) then the condition becomes for all x e k. [x,x)=0 2). (lx,II], z]+ny, z), x) + ([z,xl, til = 0 (Jacobi's identity) The condition 1) implies [x,1/]=-[1/,x).