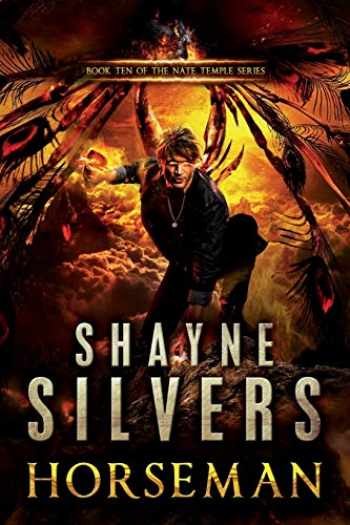 ABANDON ALL HOPE, THE FIFTH HORSEMAN SHALL RIDE...

Nate Temple is on the hunt to right a wrong. Mordred – King Arthur's son – has escaped from Hell. And it's all Nate's fault.

Pro-Tip: Don't let escapees rob the dreaded Nine Souls on their way out of Hell's Gates. It makes the escapee just an itsy-bitsy bit stronger.

But what are the Nine Souls? And what does St. Louis think about having a self-proclaimed King in the twenty-first century?

And that’s not the only thing he has to worry about. He’s having flashbacks about his childhood in Fae, and it’s crippling him with migraines that knock him unconscious any time he tries to press them.

And Anubis is hunting him, because Nate recently accepted his job offer as the Guide to Hell, and it’s not a work-from-home type of job.

Nate’s going to need to beg, borrow, and steal every scrap of power he can find to stand a snowball's chance in hell against Mordred and what the notorious traitor has in store for St. Louis.

Because Mordred has been planning this moment his entire afterlife, from that dark empty cell in Hell, and will stop at nothing to get his father's old heirlooms back. A certain Round Table and a sword. Only then can his master plan truly begin...

If you like Jim Butcher, Kevin Hearne, Steve McHugh, Michael Anderle, Ilona Andrews, Patricia Briggs, Shannon Mayer, or K.F. Breene, you will LOVE the TENTH installment of the Temple Chronicles.Click or tap BUY NOW to jump into the hellish nightmare!INTERVIEW WITH THE AUTHOR:Q: So, what makes your writing so special?
A: I wanted to write stories that mirrored the books I liked to read in my childhood. My top picks were usually urban fantasy, paranormal best sellers, and of course, books featuring your classic gritty, pulp-fiction heroes. Basically, anything with a lot of creepy crawly supernatural characters: mythical creatures, ancient heroes, super villains, and gods. You will find that my stories focus on the ancient myths, characters, and stories we all know, fear, and love. Then twist them up and toss them back like an empty beer can.

Q: Aside from Nate Temple, what other books do you write, and what order should I read them in?
A: I also write the Amazon Bestselling Feathers and Fire Series that takes place in the Temple Universe about a young female wizard named Callie who hunts monsters for the Vatican:

Temple Chronicles eBook categories:
Scroll up and tap or click BUY NOW to jump face-first into this wild ride with Gods, Legends, shifters, and vampires!!**PREORDER NOW TO GET THE BOOK WIRELESSLY DELIVERED TO YOUR KINDLE!***
OVER A MILLION READERS HAVE BEEN PLEASURED BY THE TEMPLE VERSE NOVELS. NOW IT’S YOUR TURN…
Show more