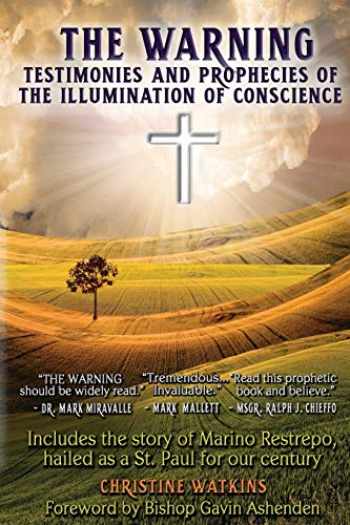 The Warning: Testimonies and Prophecies of the Illumination of Conscience

This highly acclaimed and captivating book offers the world the most thorough understanding to date of “the Warning,” or “the Illumination of Conscience”—a critical moment in human history when every person alive will see their soul in the light of divine truth—including fascinating stories of those who have already experienced it for themselves.

“Christine Watkins has done a tremendous work…invaluable and timely” says Mark Mallet. Bishop Gavin Ashenden, Chaplain to the Queen of England (2008-2017) comments in his foreword to the book, “I devoured it, unable to put it down.”…“Inspirational…I highly recommend it,” says Fr. John Struzzo. Monsignor Ralph J. Chieffo urges, “Read this prophetic book and believe,” Dr. Mark Miravalle writes, “THE WARNING should be widely read and discerned seriously with an open mind,” and Fr. Bernardin Mugabo makes the heartfelt appeal, “I wish everyone would read this!”

Bishop Ashenden, begins his foreword with, “Every so often a book falls into one’s hands that is particularly powerful in unveiling the mystery and power of God’s purpose for his Church today, and this is one such. If you are wondering whether or not you should take the time to read it, let me strongly encourage you to do so.”

The prophecies of the Warning, as outlined and illustrated in this book, have come to us through saints and mystics, including St. Pope Pius IX, St. Pope Paul VI, St. Faustina Kowalska, Blessed Anna Maria Taigi, and Servant of God, Maria Esperanza. Some of these spiritual luminaries are still alive, such as exorcist, mystic, and Superior General, Fr. Michel Rodrigue; stigmatist and mystic, Janie Garza; and founder of the Dynamic Catholic Institute, Matthew Kelly.

Not only does THE WARNING substantiate an event of monumental importance, which appears to be on the horizon of time, but also carries the reader through compelling testimonies of those who have already experienced it personally and against their will. The book culminates in the spell-binding story of Marino Restrepo, hailed as a St. Paul for our century. Formerly a well-to-do Hollywood music producer who sank into serious sin and the New Age movement, he endured a torturous kidnapping by Colombian guerilla rebels for over half a year, during which he experienced an illumination of conscience. In addition, he received a unique gift of infused knowledge of divine matters, which he has been sharing with the world since 1999 in his world-wide, bishop-approved apostolate. And his is only one of the stories. . .

The prophecies and testimonies of the Illumination of Conscience promise to astound, entertain, challenge, and prepare those who read this book and who believe.