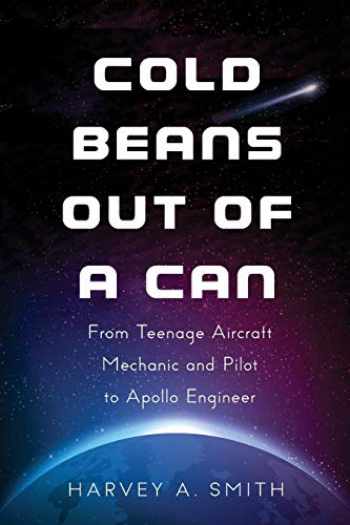 Cold Beans Out of a Can: From Teenage Aircraft Mechanic and Pilot to Apollo Engineer

Cold Beans Out of a Can is the story of one man’s unconventional path to becoming an engineer and department head on the Apollo moon project. From his childhood in rural Massachusetts, where, as a teenager, he trained as an aircraft mechanic and pilot, to his role heading up fifty design engineers working on the life-support backpack that would accompany astronauts to the moon, Smith’s story is a glimpse into the myriad details and heroic effort that went into America’s success in winning the race to the moon fifty years ago.

In a style both folksy and informative, Smith describes how he started working on and flying airplanes at age fifteen, attending aircraft mechanics school while pumping gas at night and subsisting primarily on beans out of a can. After graduation, Smith worked as an FAA-licensed aircraft mechanic, performing major structural repairs, engine overhauls, and airworthiness inspections, at one point sawing a glider in half and welding it back together. Later, he went on to college, where he studied aeronautical engineering, landing a job at a high-tech startup specializing in jet-engine thrust, before finally going to work on the Apollo program at Hamilton Standard, a NASA subcontractor.

Along the way, Smith had plenty of adventures, both in the air and on the ground, culminating in the controlled chaos of the Apollo program, where his division succeeded in producing a life-support system that astronaut Rusty Schweickart would test for the first time in space and that Neil Armstrong and Buzz Aldrin would use just four months later, when Apollo 11 set down on the moon.