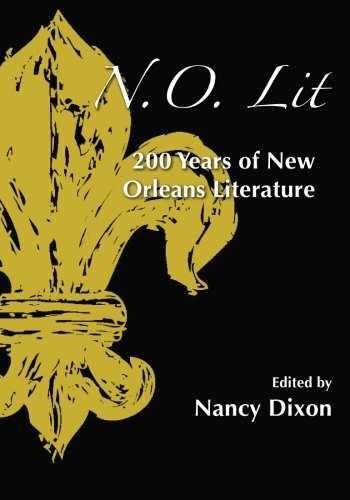 N.O. Lit: 200 Years of New Orleans Literature is, quite simply, the most comprehensive collection of the literature of New Orleans ever. Designed as an introduction for scholars and a pleasure for everyone, this volume will set the standard for years to come.

Dixon has gathered some of the most prominent writers long associated with New Orleans, like Lafcadio Hearn, Tennessee Williams, Truman Capote, and Eudora Welty, but perhaps more fascinating are the ones we can discover for the first time, like the writers of Les Cenelles, French Creoles of color who published the first anthology of African American literature in 1845, or Los Isleños, descendents of the 17th-century Spanish immigrants from the Canary Islands, still a close-knit community today. From the first play ever performed in New Orleans in 1809, through Tom Dent’s compelling 1967 drama of violence in the streets, Ritual Murder, this collection traces the city’s history through its authors.

Louisianians, and particularly New Orleanians, do tend to go on and on about the literary heritage of this deepest South of Deep South pieces of turf. And it is with justification, of course. In the past, however, books about said literary heritage have been piecemeal and have tended to concentrate on one author or one era of our history. It's with great pleasure that I recommend to readers therefore, the new and excellent book by Nancy Dixon, N. O. Lit: 200 Years of New Orleans Literature. Nancy has presented pieces of this book in the past at the Faulkner Society's annual Words & Music festival and in her presentations she's always made her subject matter not only informative but accessible, entertaining. She's done the same thing with the book, starting with the oldest known play written and produced in New Orleans, Paul LeBlanc de Villeneufve’sTheFestival of the Young Corn, or The Heroism of Poucha-Houmma dated 1809. She relates themes of that play to the pervasive violence in New Orleans today, giving the play contemporary relevance. She leads us on through the 19th and 20th centuries and winds up with Fatima Shaik's story of desegration in the 20th Century. It's 500-plus pages of great stuff and when you see it all together like this, it's impressive and will no doubt enforce our tendency to go on and on about our literary heritage.

—Rosemary James, Co-Founder, Pirate's Alley Faulkner Society and Words & Music, author of My New Orleans: Ballads to the Big Easy by Her Sons, Daughers, and Lovers