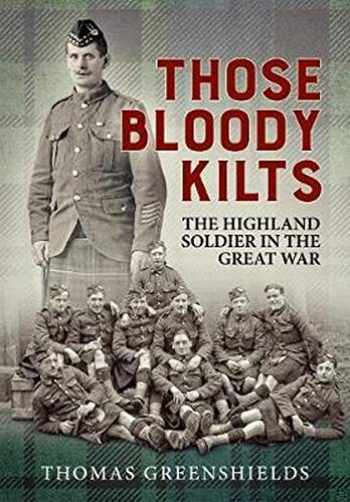 Those Bloody Kilts: The Highland Soldier in the Great War (Wolverhampton Military Studies)

The book is the first to examine comprehensively the experience of the Highland soldier in the Great War, seeking the truth behind the myths. It does not deal with the operational history, but with the life and character of the Highland soldier. It involves a far more comprehensive search of the original sources than previously attempted, being based on the original letters, diaries and accounts of serving soldiers and officers, principally from the Imperial War Museum, the Liddle Collection, the National Library of Scotland and the Regimental Museums, which together provide great richness of personal detail. Much work on Highland soldiers, and almost all popular work, has perpetuated myths about their unique character and martial spirit. This book critically examines such mythology and offers new insights into the practicality of the kilt, the use of the pipes, identity and morale, and frank revelations about courage, nerves, shell-shock and failure and the ruthless use of the bayonet. The whole is evidence based and scholastically sound, but nevertheless thoroughly readable and accessible to the general reader.

The book reviews the Highland regiments before the declaration of war in 1914, including the kilted regiments not only of Scotland, but of England and the Empire. This includes an examination of their nature, composition, recent battle experience in South Africa and the Empire, sense of identity, public image and reputation. It then reviews the Highland battalions which actually went to war, including not only the prewar Regular and Territorial battalions, but also the additional Territorial, Service, Garrison and Reserve battalions raised in the United Kingdom, together with the battalions raised for war service in Canada and South Africa. Specifically, it examines their composition, including Gaelic speakers, non-Highland Scots, recruits from the other home countries, including England, from the Empire and from foreign countries. It examines how composition varied between Regular, Territorial and Kitchener battalions etc, and how it changed with huge losses, replacement drafts and the introduction of conscription. It further examines the background of both officers and men and the reasons why they specifically joined Highland regiments.

The book briefly describes the evolution of the Highland uniform during the war. More particularly, it examines the experience of the Highland soldier wearing the kilt, including its attraction for recruits, their first introduction to the kilt, regulations, custom and tradition for wearing the kilt, delays in issuing the kilt, the issue of khaki kilts, opinions of the kilt, self-image, pride and identity. It also considers its attractiveness to the ladies, the French and others, and the practicalities, risks and challenges of wearing it at home and behind the lines. It goes on to consider the practicality of the kilt at war, including exposure to cold, wet and mud, and the problems of lice, mosquitoes, barbed wire, easy recognition and mustard gas. It also considers attempts to alleviate these difficulties, for example through the temporary issue of trousers, or through proposals for abolishing the kilt in the trenches. In addition, it investigates soldiers’ opinions of the kilt at war.

One chapter considers how the pipes were actually used in training, in battle and behind the lines. It demonstrates how, while on occasion the pipes were still used to pipe troops into battle, increasingly they were held back from the battle itself and used principally to boost morale behind the lines. It also investigates what the soldiers actually thought of the pipes, and the ways in which they contributed to morale, including both the reinforcement of identity and the emotional and stirring impact of the music itself.

The book examines the way that discipline and interpersonal relations actually worked in the Highland battalions. It examines the exercise of discipline, and the relationships between officers, N.C.O.’s and men to see if there is any evidence at all for a more informal style of discipline and a distinctive ‘family character’ in the Highland battalions, as frequently claimed. It also examines the personal relationships between the men, formed amongst small units (sections), groups of pals and between particular pals, identifying the support mechanisms used to maintain morale in the face of adversity. It relates these ‘low level’ support mechanisms to support from home, the hierarchical relationships discussed above, and the overarching support provided by the battalion and regiment, to build a model of the way in which mutually reinforcing support mechanisms contributed to the maintenance of morale. It also considers identity and self-image, including identity as Highland soldiers, as members of individual regiments and battalions, and as Scots, and relates these elements to a model of the way morale worked. It includes a consideration of the extent to which specific customs and traditions were observed in the Highland battalions.

The book considers the behavior of the Highland soldier in battle, looking at their reputation for ferocity, the cult of the bayonet, their attitude towards the Germans, the taking or otherwise of prisoners and evidence for their treatment. It also looks at their reputation for courage, considering examples of courage alongside other examples of nerves, shell-shock and, on occasion, failure.

The final chapter brings together the strands discussed in the preceding chapters, and seeks to identify what, if anything, truly made the Highland soldier unique, and to what extent his experience was simply the same as that of the ordinary Tommy.