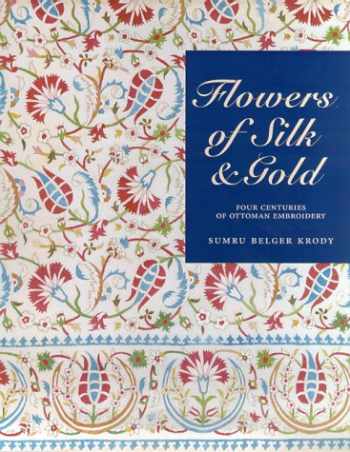 Until now, the rich textile tradition of the Ottoman Empire has rarely been been given the detailed consideration it deserves. Sumru Belger Krody here examines the practice of the intricate art of embroidery, which united the various ethnic and religious groups of the empire under a single aesthetic and gave rise to flowers of silk and gold that still enchant our imagination.

The Imperial City of Istanbul was the seat of power of the Ottoman Empire for nearly five hundred years, and like most imperial capitals it was a center for trade. The bazaars of this cosmopolitan, ethnically diverse city were famous for the embroidered textiles produced both by men in the city's workshops, and by women in the seclusion of the harems. In the decoration of their homes, the Ottomans mirrored the colors and abundance of their astonishing gardens; the wall hangings, cushions, and divan covers of the private houses of the city, products of the most exquisite design on the finest and rarest of cloth, combined to give an impression of opulence and luxury to astonished Western eyes. Embroidered textiles served as furniture and ornament in daily life and during rites of passage, while their production and sale provided an income for their makers, who occupied every level of Ottoman society up to the Palace harem and court workshop.

The Textile Museum's renowned collection of Ottoman embroidery began with a single purchase by its founder, George Hewitt Myers, in 1915. Flowers of Silk and Gold introduces this little-known but highly important collection for the first time. Examining the history of the various stitches, fabrics, and designs employed during Ottoman rule in Europe and Asia, as well as the social, political, and economic factors influencing their production and consumption, Flowers of Silk and Gold combines perspectives to give an engrossing insight into the glorious works of art of an unfamiliar, much-fantasized world.