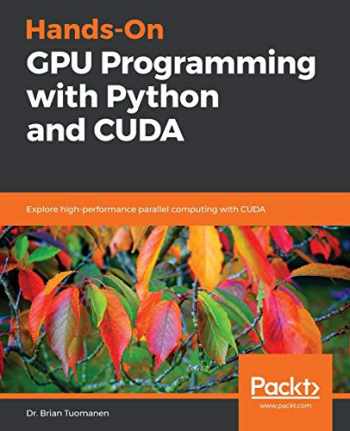 Build GPU-accelerated high performing applications with Python 2.7, CUDA 9, and open source libraries such as PyCUDA and scikit-cuda. We recommend the use of Python 2.7 as this version has stable support across all libraries used in this book.

GPU programming is the technique of offloading intensive tasks running on the CPU for faster computing. Hands-On GPU Programming with Python and CUDA will help you discover ways to develop high performing Python apps combining the power of Python and CUDA.

This book will help you hit the ground running-you'll start by learning how to apply Amdahl's law, use a code profiler to identify bottlenecks in your Python code, and set up a GPU programming environment. You'll then see how to query a GPU's features and copy arrays of data to and from its memory. As you make your way through the book, you'll run your code directly on the GPU and write full blown GPU kernels and device functions in CUDA C. You'll even get to grips with profiling GPU code and fully test and debug your code using Nsight IDE. Furthermore, the book covers some well-known NVIDIA libraries such as cuFFT and cuBLAS.

With a solid background in place, you'll be able to develop your very own GPU-based deep neural network from scratch, and explore advanced topics such as warp shuffling, dynamic parallelism, and PTX assembly. Finally, you'll touch up on topics and applications like AI, graphics, and blockchain.

By the end of this book, you'll be confident in solving problems related to data science and high-performance computing with GPU programming.

What you will learnWho this book is for

This book is for developers and data scientists who want to learn the basics of effective GPU programming to improve performance using Python code. Familiarity with mathematics and physics concepts along with some experience with Python and any C-based programming language will be helpful.