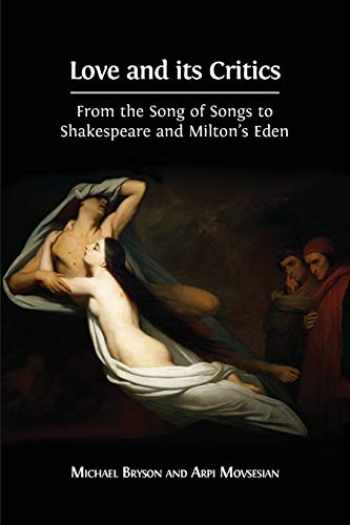 Love and its Critics: From the Song of Songs to Shakespeare and Milton's Eden

This book is a history of love and the challenge love offers to the laws and customs of its times and places, as told through poetry from the Song of Songs to John Milton’s Paradise Lost. It is also an account of the critical reception afforded to such literature, and the ways in which criticism has attempted to stifle this challenge.

Bryson and Movsesian argue that the poetry they explore celebrates and reinvents the love the troubadour poets of the eleventh and twelfth centuries called fin’amor: love as an end in itself, mutual and freely chosen even in the face of social, religious, or political retribution. Neither eros nor agape, neither exclusively of the body, nor solely of the spirit, this love is a middle path. Alongside this tradition has grown a critical movement that employs a 'hermeneutics of suspicion', in Paul Ricoeur’s phrase, to claim that passionate love poetry is not what it seems, and should be properly understood as worship of God, subordination to Empire, or an entanglement with the structures of language itself – in short, the very things it resists.

The book engages with some of the seminal literature of the Western canon, including the Bible, the poetry of Ovid, and works by English authors such as William Shakespeare and John Donne, and with criticism that stretches from the earliest readings of the Song of Songs to contemporary academic literature. Lively and enjoyable in its style, it attempts to restore a sense of pleasure to the reading of poetry, and to puncture critical insistence that literature must be outwitted.

It will be of value to professional, graduate, and advanced undergraduate scholars of literature, and to the educated general reader interested in treatments of love in poetry throughout history.