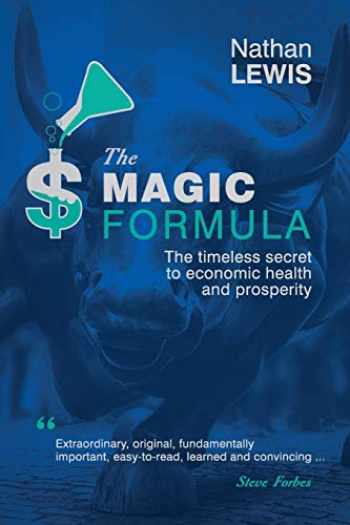 The Magic Formula: The Timeless Secret To Economic Health and Prosperity

Could the secret to economic success be reduced to four words? A country that has the “magic formula” – Low Taxes, Stable Money – finds itself going from one success to another. Another country, with every other cultural, institutional and geographic advantage one could name, stumbles and declines once it loses the Magic Formula.

Nathan Lewis shows how the rise and decline of great states and empires can be traced to whether or not they follow this simple rule. With examples including Japan after the Meiji Restoration, the rise and later disintegration of the British Empire, the “stagflation” of the 1970s, China after 1994, South Korea after 1985, Russia after 2000, the Spanish Empire of the sixteenth century, the rise and fall of the Muslim caliphates, the United States, post-communist Bulgaria, the Great Depression, the Roman Empire, postwar Germany, Ireland after 1986, the U.S. recession of 2001 or Spain’s budget crisis in 2012, over and over again, countries that follow the Magic Formula have results that can sometimes be amazing, almost inconceivable; and those that act contrary to the Magic Formula can quickly spiral into decline and even disaster.

Today, taxes are not very low; money is not very stable; our economic health is not very good; and the Magic Formula is ignored everywhere. If long-unresolved debt, deficit and entitlement issues reach a crisis stage, in the U.S. and worldwide, we may find that governments reach for higher taxes and “easy money,” even outright printing-press finance, as a stopgap solution. The results are predictable. The Magic Formulapresents a timeless solution to the problems of today and tomorrow; indeed, history says that it is the only solution that will work.