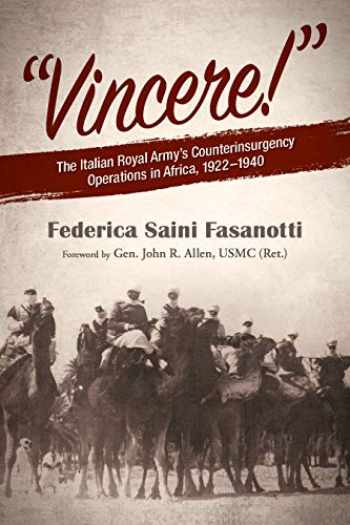 Vincere! presents an overview of the counterinsurgency operations carried out by the Italian Royal Army from 1922 to 1941 in Libya and Ethiopia. Based on ten years of study conducted in the Italian archives and on the ground, this volume looks at a period when the Italian Royal Army faced significant new challenges in the conduct of war. Facing new challenges in an atypical theater of war, Italian Royal Army forces learned significant lessons that would shape the conduct of future combat. In the period covered in this work, Italian Royal Army forces had to adapt to new terrain, while modifying their techniques and methods in relation to the local populations and the overall characteristics of the territories in Africa. Moving away from a reliance on heavy, slow battalions formed for the most part by Italian troops, the Italians instead turned to mobile units, lightly armed and composed primarily by African troops who were able to respond quickly to the needs of this kind of war. Men coming from the loyal Eritrean colony, from Somalia, Libya, from the countries on the Red Sea and even from Ethiopia, progressively replaced Italian troops. In Libya, warfighting and counterinsurgency operations were conducted mainly by regular infantry (Libyan battalions, Méharists, Saharian) and cavalry units (Savaris and Spahis), while in Ethiopia, regular and irregular bands were used. Vincere! offers a look at some of the earliest irregular warfare and counterinsurgency operations the modern Italian forces ever conducted.

Italian forces faced local populations while conducting counterinsurgency (COIN) operations in what was, for them, a new theater of war. In Libya, the rebellion was quelled in the space of ten years, at an admittedly high price for the regional forces. In Ethiopia, where COIN operations were interrupted by World War II, the available data suggests that military actions, accompanied by a more responsible policy toward the population, would have eventually defeated the insurgency. The use of airpower in Ethiopia made a huge difference, and its lessons were learned long before the French experience in Algeria. The Italians waged counterinsurgency operations over twenty years in two geographically separate theaters, and in two very different operational environments and much of value for current practitioners and scholars can be learned from these different experiences.