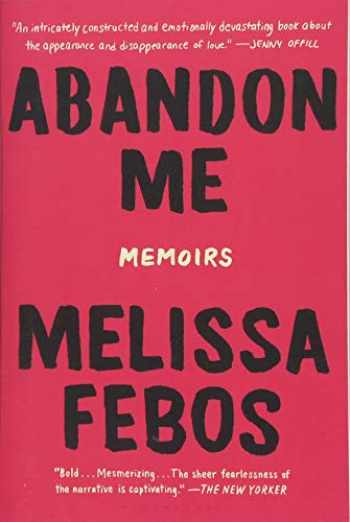 Acknowledged authors Febos, Melissa wrote Abandon Me: Memoirs comprising 336 pages back in 2018. Textbook and eTextbook are published under ISBN 1632866587 and 9781632866585. Since then Abandon Me: Memoirs textbook was available to sell back to BooksRun online for the top buyback price of $ 1.47 or rent at the marketplace.
Show more

Named One of the Best Books of 2017 by:
Esquire, Refinery29, LitHub, BookRiot, Medium, Electric Literature, The Brooklyn Rail, Vol. 1 Brooklyn, Largehearted Boy, The Coil and The Cut.

For readers of Maggie Nelson and Leslie Jamison, a fierce and dazzling personal narrative that explores the many ways identity and art are shaped by love and loss.

In her dazzling Abandon Me, Febos captures the intense bonds of love and the need for connection -- with family, lovers, and oneself. First, her birth father, who left her with only an inheritance of addiction and Native American blood, its meaning a mystery. As Febos tentatively reconnects, she sees how both these lineages manifest in her own life, marked by compulsion and an instinct for self-erasure. Meanwhile, she remains closely tied to the sea captain who raised her, his parenting ardent but intermittent as his work took him away for months at a time. Woven throughout is the hypnotic story of an all-consuming, long-distance love affair with a woman, marked equally by worship and withdrawal. In visceral, erotic prose, Febos captures their mutual abandonment to passion and obsession -- and the terror and exhilaration of losing herself in another.

At once a fearlessly vulnerable memoir and an incisive investigation of art, love, and identity, Abandon Me draws on childhood stories, religion, psychology, mythology, popular culture, and the intimacies of one writer’s life to reveal intellectual and emotional truths that feel startlingly universal.