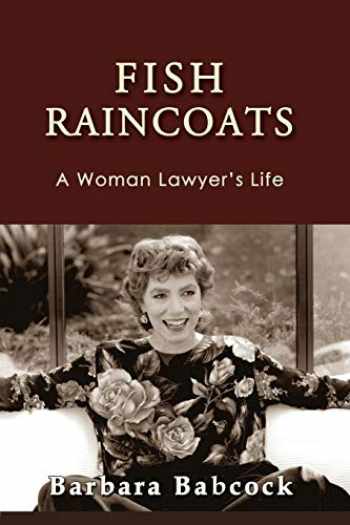 The life and times of a trailblazing feminist in American law. The first female Stanford law professor was also first director of the District of Columbia Public Defender Service, one of the first women to be an Assistant Attorney General of the United States, and the biographer of California’s first woman lawyer, Clara Foltz. Survivor, pioneer, leader, and fervent defender of the powerless and colorful mobsters alike, Barbara Babcock led by example and by the written word — and recounts her part of history in this candid and personal memoir.

“For woman lawyers, Barbara Babcock has led the way. How? By being smarter and tougher than the men; also, more empathetic and self-aware. Funny, shrewd, and telling, her memoir Fish Raincoats is a joy to read.”
— Evan Thomas, author of Being Nixon: A Man Divided

“Life will afford you no better sherpa on the extraordinary journey women have taken in the legal profession than Barbara Babcock. This book should be required reading for anyone who isn’t certain that they have a place at the lawyers table. Babcock’s amazing life has made a space for so many of us. Her story will do the same.”
— Dahlia Lithwick, Senior Editor, Slate

“An immensely engaging, articulate and detail-rich memoir from a pioneer who helped forge the path for women in the legal profession. Barbara Babcock taught, mentored and inspired generations of law students to look beyond the billable hour; she has chronicled her times — the modern Women’s Movement, the challenges and characters she met along the way — with insight, humility and grace.”
— Thelton E. Henderson, Senior U.S. District Judge, San Francisco

“‘But men are writing the history!’ Barbara Babcock thought to herself in response to a sexist comment about women in the law years ago. Not anymore. Babcock spins her formidable legal career into insightful stories about how she made her way and made her field her own. The best kind of personal history.”
— Emily Bazelon, author of Sticks and Stones: Defeating the Culture of Bullying and Rediscovering the Power of Character and Empathy

A compelling new addition to the Journeys & Memoirs Series from Quid Pro Books.