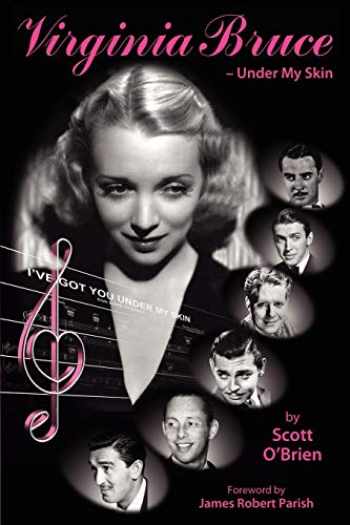 Virginia Bruce - Under My Skin

In Born to Dance (1936), Virginia Bruce tempted James Stewart while introducing Cole Porter's "I've Got You Under My Skin." That same year, she dazzled as the archetypal showgirl in the Oscar-winning The Great Ziegfeld. Fans and critics saw her poised for major stardom at MGM.

Delve into her turbulent life and career. In James Robert Parish's Foreword, he notes Virginia's quiet charisma, the haunted, distracted look of her eyes, her vibrant voice, and her "off-screen life . . . far more exciting and exotic than any role she experienced on camera."

Love was very important to Virginia. She fell hard for screen idol John Gilbert during their filming of Downstairs (1932). When the virile, yet deeply troubled Gilbert proposed marriage, Hollywood held its collective breath. The merger ended in divorce, but provided the basis for the Selznick's A Star is Born (1937). Virginia's career took off, but the question was, "Did Louis B. Mayer have it in for her?" Mayer had hated Gilbert. After a brief, idyllic, yet tragic second marriage to director-producer J. Walter Ruben, Virginia's career focused more on radio, and an occasional "B" film. Her marriage to a young Turk, Ali Ipar in 1946 provided another unusual twist to Virginia's life, and ultimately a bittersweet ending.