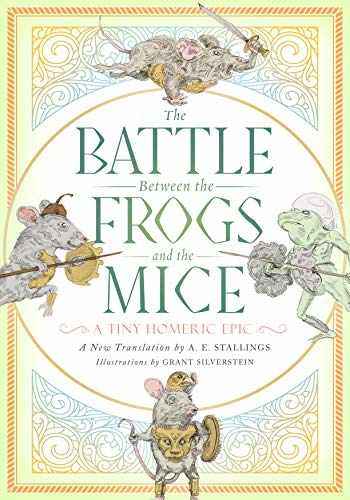 The Battle between the Frogs and the Mice: A Tiny Homeric Epic

"A virtuosic, witty, charming translation of the greatest epic ever written about mice, with wonderful illustrations by Grant Silverstein. Stallings' elegant rhyming couplets are the perfect choice to honor the mousy Muse."―Emily Wilson, Professor of Classics, University of Pennsylvania

"Stallings' translation of this ancient epic is a delight: charming, witty, and vividly alive, with buoyant rhymes and eye-catching illustrations. I suspect this will become a beloved addition in many home libraries."―Madeline Miller, bestselling author of Circe

From the award-winning poet and translator A. E. Stallings comes a lively new edition of the ancient Greek fable The Battle between the Frogs and the Mice. Originally attributed to Homer, but now thought to have been composed centuries later by an unknown author, The Battle is the tale of a mouse named Crumbsnatcher who is killed by the careless frog King Pufferthroat, sparking a war between the two species. This dark but delightful parable about the foolishness of war is illustrated throughout in striking drawings by Grant Silverstein.

The clever introduction is written from the point of view of a mouse who argues that perhaps the unknown author of the fable is not a human after all: “Who better than a mouse, then, to compose our diminutive, though not ridiculous, epic, a mouse born and bred in a library, living off lamp oil, ink, and the occasional nibble of a papyrus, constantly perched on the shoulder of some scholar or scholiast of Homer, perhaps occasionally whispering in his ear? Mouse, we may remember, is only one letter away from Muse.”