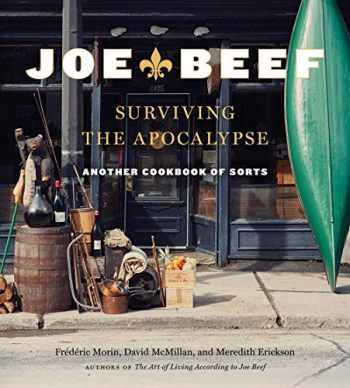 Joe Beef: Surviving the Apocalypse: Another Cookbook of Sorts

A new cookbook/survival guide/love letter to Montreal for these apocalyptic times, from the James Beard Award–nominated culinary adventurists and proprietors of the beloved restaurant, Joe Beef.

“The first Joe Beef cookbook changed forever what a cookbook could be. Anything that came after had to take it into account. Now, with this latest and even more magnificent beast, the rogue princes of Canadian cuisine and hospitality show us the way out of the numbing, post-apocalyptic restaurant Hell of pretentiousness and mediocrity that threatens to engulf us all. It makes us believe that the future is shiny, bright, beautiful, delicious—and probably Québécois. This book will change your life.” —Anthony Bourdain

It’s the end of the world as we know it. Or not. Either way, you want Joe Beef: Surviving the Apocalypse in your bunker and/or kitchen.

In their much-loved first cookbook, Frédéric Morin, David McMillan, and Meredith Erickson introduced readers to the art of living the Joe Beef way. Now, they’re back with another deeply personal, refreshingly unpretentious collection of more than 150 new recipes, some taken directly from the menus of Fred and Dave’s acclaimed Montreal restaurants, others from summers spent on Laurentian lakes and Sunday dinners at home. Think Watercress Soup with Trout Quenelles, Artichokes Bravas, and seasonal variations on Pot-au-Feu—alongside Smoked Meat Croquettes, a Tater Tot Galette, and Squash Sticky Buns.

Also included are instructions for making your own soap and cough drops, not to mention an epic 16-page fold-out gatefold with recipes and guidance for stocking a cellar with apocalyptic essentials (Canned Bread, Pickled Pork Butt, and Smoked Apple Cider Vinegar) for throwing the most sought-after in-bunker dinner party

Filled with recipes, reflections, and ramblings, in this book you’ll find chapters devoted to the Québécois tradition of celebrating Christmas in July, the magic of public television, and Fred and Dave’s unique take on barbecue (Burnt-End Bourguignon, Cassoulet Rapide), as well as ruminations on natural wine and gluten-free cooking, and advice on how children should behave at dinner.

Whether you’re holing up for a zombie holocaust or just cooking at home, Joe Beef is a book about doing it yourself, about making it on your own, and about living—or at least surviving—in style.