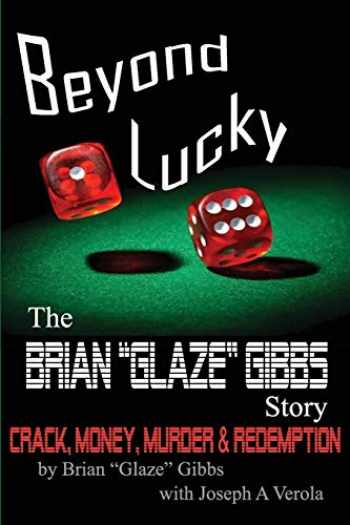 “Time stopped, I heard nothing, but felt the recoil, forcing my hand to jerk back. I watched the bullet and sensed it travel through her head and then the sound as it exited, made everything crystal clear. I must have closed my eyes, because I never saw any blood as her head didn't seem to budge. It was surreal. Then, being so close, the matter from her brain, head and skull splattered onto my face. I can recall, not thinking, taking my tongue licking the blood from my face and using the sleeve of my hoodie to wipe off the rest. At that moment I realized I crossed over to the dark side.” -Glaze suspected of killing of a rookie cop, that enraged the country and started police drug raids and investigations throughout America, tells the real facts behind the killing of Edward Byrnes. -Beyond Lucky is a story of extraordinary violence, brutality and redemption. Crack, money, murder and Brian “Glaze” Gibbs became synonymous to local and federal law enforcement agencies. Brian admits he was guided by a distorted logic and the peer pressure of the inner city and the desire to be Fly: shakin, money makin and stylin’. -From the bloody streets of New York to being singled out by Joe Biden’s 1996 senate subcommittee investigating the effectiveness of the Witness Protection Program. During that hearing the US Government admitted it had given him the deal, believing he was responsible for fifty murders, and was allowed to keep thirty-five million dollars from his trade as a drug lord. -"Glaze" describes in great detail how despite being raised by a loving mother and being a church going child he became a major drug lord. He started out as an enforcer for one of the most notorious drug lords and eventually became so bloodthirsty that his mentor and accomplices had to restrain him. -What makes Brian's story so special is that individuals such as Leslie Caldwell, Assistant Attorney General, who fought to get him into the Witness Protection program after Glaze confessed to multiple murders, attempted murders and drug trafficking. -Beyond Lucky! How does a man like Brian "Glaze" Gibbs roll the dice and escape a death sentence, or multiple life sentences, and survived the New York City drug wars that resulted in hundreds of people being killed – too many of them by him. He has been described as the murderer with a big heart and endless charisma. -After serving only eight years and eight months for his crimes, he was given a new identity and unbeknownst to his neighbors – he is now a murderer in their midst. -It's easy for Brian to say he has changed, been redeemed, but to have it confirmed by key individuals whom he is still in contact with such as: Joe Ponzi, Chief Investigator for the New York State District Attorney's Office and Leslie Caldwell, Assistant United State Attorney, FBI agents Richard Martinez and David Higgins who originally were Glaze's nemesis, fought to get him one more chance at life. Glaze, when asked why he was so fortunate, he responded, “Well, I wonder myself, but I'm not one to second guess God." -Brian "Glaze" Gibbs is the blueprint for every drug lord that that grew up in York City. A story any wannabe criminal, drug dealer should read before hitting "The Street" wanting to make $40,000 a day.