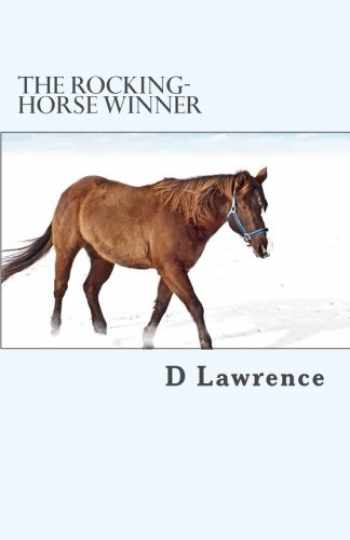 "The Rocking-Horse Winner" is a short story by D. H. Lawrence. The story describes a young middle-class Englishwoman who "had no luck." Though outwardly successful, she is haunted by a sense of failure; her husband is a ne'er-do-well and her work as a commercial artist doesn't earn as much as she'd like. The family's lifestyle exceeds its income and unspoken anxiety about money permeates the household. Her children, a son Paul and his two sisters, sense this anxiety; moreover, the kids even claim they can hear the house whispering "There must be more money." Paul tells his Uncle Oscar Cresswell about betting on horse races with Bassett, the gardener. He's been placing bets using his pocket money and has won and saved three hundred twenty pounds. Sometimes he says he is "sure" of a winner for an upcoming race, and the horses he names do in fact win, sometimes at remarkable odds. Uncle Oscar and Bassett both place large bets on the horses Paul names. After further winning, Paul and Oscar arrange to give the mother a gift of five thousand pounds, but the gift only lets her spend more. Disappointed, Paul tries harder than ever to be "lucky". As the Derby approaches, Paul is determined to learn the winner. Concerned about his health, his mother rushes home from a party and discovers his secret. He has been spending hours riding his rocking horse, sometimes all night long, until he "gets there", into a clairvoyant state where he can be sure of the winner's name. Paul remains ill through the day of the Derby. Informed by Cresswell, Bassett has placed Paul's bet on Malabar, at fourteen to one. When he is informed by Bassett that he now has 80,000 pounds, Paul says to his mother: "I never told you, mother, that if I can ride my horse, and get there, then I'm absolutely sure – oh absolutely! Mother, did I ever tell you? I am lucky!" "No, you never did," said his mother. The boy dies in the night and his mother hears her brother say, “My God, Hester, you’re eighty-odd thousand to the good, and a poor devil of a son to the bad. But, poor devil, poor devil, he’s best gone out of a life where he rides his rocking horse to find a winner.”