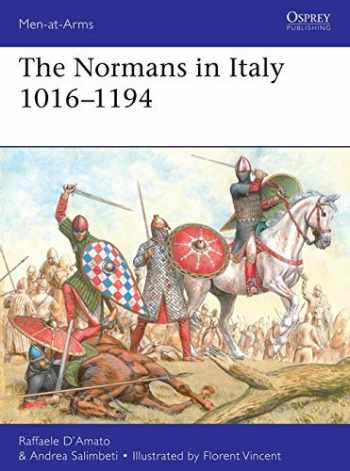 This title covers the history and armies of the powerful military kingdom founded by the Normans in southern Italy and Sicily, which were contemporary to William the Conqueror's invasion of England.

Preceding and simultaneously with the conquest of England by Duke William, other ambitious and aggressive Norman noblemen (notably the Drengot, De Hauteville, and Guiscard families) found it prudent to leave Normandy. At first taking mercenary employment with Lombard rulers then fighting the Byzantine Empire in southern Italy, many of these noblemen achieved great victories, acquired rich lands of their own, and perfected a feudal military system that lasted for 200 years. As news of the rich pickings to be had in the south spread in Normandy, they were joined by many other opportunists--typically, younger sons who could not inherit lands at home. Steadily, these Norman noblemen fought their way to local power, at first in Apulia, then across the Adriatic in Albania, and finally in Muslim Sicily, defeating in the process the armies of Byzantium, the German “Holy Roman Empire," and Islamic regional rulers. Finally, in 1130, Roger II founded a unified kingdom incorporating southern Italy and Sicily, which lasted until the death of Tancred of Lecce in 1194--though its legacy long outlasted Norman political rule.

This beautifully illustrated title explores not only the Norman armies, but the armies of their opponents, with full-color plates and expert analysis revealing fascinating details about the fighting men of Normandy, Byzantium, the Arab armies, and more.