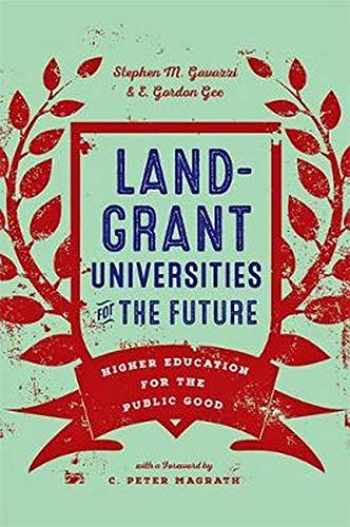 Land-Grant Universities for the Future: Higher Education for the Public Good

Land-grant colleges and universities have a storied past. This book looks at their future.

Land-grant colleges and universities occupy a special place in the landscape of American higher education. Publicly funded agricultural and technical educational institutions were first founded in the mid-nineteenth century with the Morrill Act, which established land grants to support these schools. They include such prominent names as Cornell, Maryland, Michigan State, MIT, Ohio State, Penn State, Rutgers, Texas A&M, West Virginia University, Wisconsin, and the University of California―in other words, four dozen of the largest and best public universities in America. Add to this a number of historically black colleges and universities (HBCUs) and tribal colleges―in all, almost 300 institutions. Their mission is a democratic and pragmatic one: to bring science, technology, agriculture, and the arts to the American people.

In this book, Stephen M. Gavazzi and E. Gordon Gee discuss present challenges to and future opportunities for these institutions. Drawing on interviews with 27 college presidents and chancellors, Gavazzi and Gee explore the strengths and weaknesses of land-grant universities while examining the changing threats they face. Arguing that the land-grant university of the twenty-first century is responsible to a wide range of constituencies, the authors also pay specific attention to the ways these universities meet the needs of the communities they serve. Ultimately, the book suggests that leaders and supporters should become more fiercely land-grant in their orientation; that is, they should work to more vigorously uphold their community-focused missions through teaching, research, and service-oriented activities.

Combining extensive research with Gee’s own decades of leadership experience, Land-Grant Universities for the Future argues that these schools are the engine of higher education in America―and perhaps democracy’s best hope. This book should be of great interest to faculty members and students, as well as those parents, legislators, policymakers, and other area stakeholders who have a vested interest in the well-being of America’s original public universities.