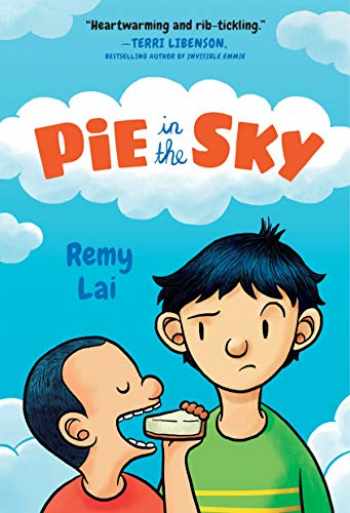 Pie in the Sky

Acknowledged authors Lai, Remy wrote Pie in the Sky comprising 384 pages back in 2019. Textbook and eTextbook are published under ISBN 1250314100 and 9781250314109. Since then Pie in the Sky textbook was available to sell back to BooksRun online for the top buyback price or rent at the marketplace.
Show more

A poignant, laugh-out-loud illustrated middle-grade novel about an eleven-year-old boy's immigration experience, his annoying little brother, and their cake-baking hijinks! Perfect for fans of Raina Telgemeier and Gene Luen Yang!

"Pie in the Sky is like enjoying a decadent cake . . . heartwarming and rib-tickling." ―Terri Libenson, bestselling author of Invisible Emmie

When Jingwen moves to a new country, he feels like he’s landed on Mars. School is torture, making friends is impossible since he doesn’t speak English, and he's often stuck looking after his (extremely irritating) little brother, Yanghao.

To distract himself from the loneliness, Jingwen daydreams about making all the cakes on the menu of Pie in the Sky, the bakery his father had planned to open before he unexpectedly passed away. The only problem is his mother has laid down one major rule: the brothers are not to use the oven while she's at work. As Jingwen and Yanghao bake elaborate cakes, they'll have to cook up elaborate excuses to keep the cake making a secret from Mama.

* "The humor [is] akin to that of Jeff Kinney’s popular “Wimpy Kid” series . . . the perfect mixture of funny and emotionally resonant." ―School Library Journal, starred review

This title has common core connections.