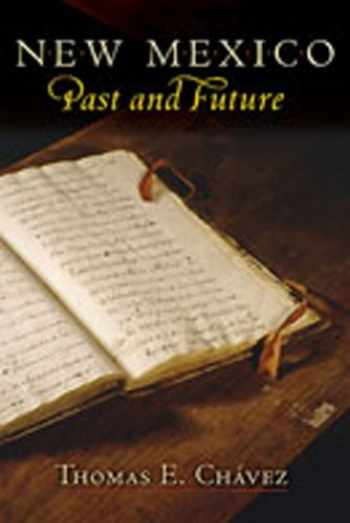 New Mexico Past and Future

There have been many histories of New Mexico written for the general public in recent years. However, New Mexico Past and Future approaches the state's history differently.

First, Thomas Chávez asserts dates and names are not important. Relative time and cause and effect are the important keys to making sense of any history. Second, history is the story of human beings--people who feel sadness and happiness and pain, people who lived in the land that came to be called New Mexico.

New Mexico is the only official bilingual state in the Union. Election ballots are printed in Spanish and English, state driving examinations are offered in Spanish or English, and the twenty-two American Indian tribes and nations in the state maintain their own languages as well.

In his Epilogue, Chávez points out New Mexico has a message applicable to humanity no matter where it may be: all the cultures that come to us became a part of our society.

"New Mexico is the only state in the Union that has 'U.S.A.' on its automobile license plates. This is not done out of any sense of patriotism. Rather, New Mexicans learned early on that they needed to explain to the rest of the country that New Mexico is one of the fifty states. There still exists a lack of understanding about New Mexico."--from New Mexico Past and Future