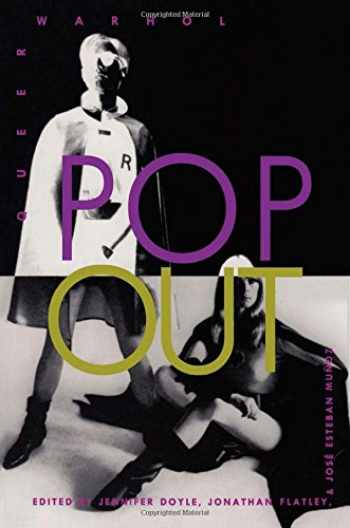 Andy Warhol was queer in more ways than one. A fabulous queen, a fan of prurience and pornography, a great admirer of the male body, he was well known as such to the gay audiences who enjoyed his films, the police who censored them, the gallery owners who refused to show his male nudes, and the artists who shied from his swishiness, not to mention all the characters who populated the Factory. Yet even though Warhol became the star of postmodernism, avant-garde, and pop culture, this collection of essays is the first to explore, analyze, appreciate, and celebrate the role of Warhol’s queerness in the making and reception of his film and art. Ranging widely in approach and discipline, Pop Out demonstrates that to ignore Warhol’s queerness is to miss what is most valuable, interesting, sexy, and political about his life and work.
Written from the perspectives of art history, critical race theory, psychoanalysis, feminist theory, cinema studies, and social and literary theory, these essays consider Warhol in various contexts and within the history of the communities in which he figured. The homoerotic subjects, gay audiences, and queer contexts that fuel a certain fascination with Warhol are discussed, as well as Batman, Basquiat, and Valerie Solanas. Taken together, the essays in this collection depict Warhol’s career as a practical social reflection on a wide range of institutions and discourses, including those, from the art world to mass culture, that have almost succeeded in sanitizing his work and his image.