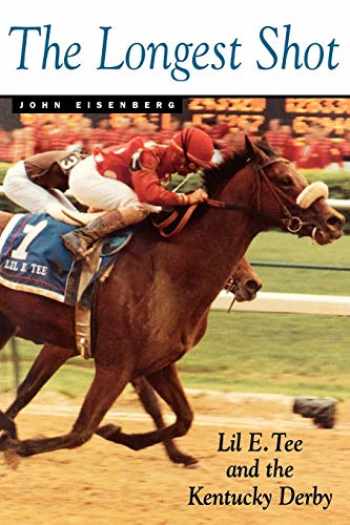 The Longest Shot: Lil E. Tee and the Kentucky Derby

On the first Saturday in May every year in Louisville, Kentucky, shortly after 5:30 PM, a new horse attains racing immortality. The Kentucky Derby is like no other race, and its winners are the finest horses in the world. Covered in rich red roses, surrounded by flashing cameras and admiring crowds, these instant celebrities bear names like Citation, Secretariat, Spectacular Bid, and Seattle Slew. They're worth hundreds of thousands of dollars. But in 1992, a funny thing happened on the way to the roses. The rattling roar of 130,000 voices tailed off into a high, hollow shriek as the horses crossed the finish line.

Lil E. Tee? ABC broadcasters knew nothing about him, but they weren't alone. Who knew about Lil E. Tee? A blacksmith in Ocala, Florida, a veterinary surgeon in Ringoes, New Jersey, a trainer a Calder Race Course, and a few other people used to dealing with average horses knew this horse―and realized what a long shot Lil E. Tee really was.

On a Pennsylvania farm that raised mostly trotting horses, a colt with a dime-store pedigree was born in 1989. His odd gait and tendency to bellow for his mother earned him the nickname "E.T." Suffering from an immune deficiency and a bad case of colic, he survived surgery that usually ends a horse's racing career. Bloodstock agents dismissed him because of his mediocre breeding, and once he was sold for only $3,000. He'd live in five barns in seven states by the time he turned two. Somehow, this horse became one of the biggest underdogs to appear on the American sporting landscape.

Lil E. Tee overcame his bleak beginnings to reach the respected hands of trainer Lynn Whiting, jockey Pat Day, and owner Cal Partee. After winning the Jim Beam stakes and finishing second in the Arkansas Derby, Lil E. Tee arrived at Churchill Downs to face a field of seventeen horses, including the highly acclaimed favorite, Arazi, a horse many people forecast to become the next Secretariat. A 17-to-1 longshot, Lil E. Tee won the Derby with a classic rally down the home stretch, and finally Pat Day had jockeyed a horse to Derby victory.

John Eisenberg draws on more than fifteen years of sports writing experience and a hundred interviews throughout Pennsylvania, Kentucky, Florida, and Arkansas to tell the story almost nobody knew in 1992. Eisenberg is a sports columnist for the Baltimore Sun and has won more than twenty awards for his sports writing, including several Associated Press sports editors' first places."