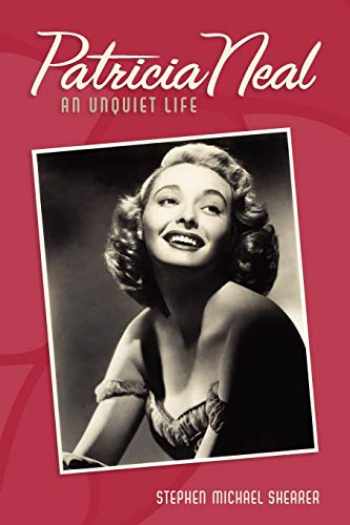 Acknowledged authors Shearer, Stephen Michael wrote Patricia Neal: An Unquiet Life comprising 508 pages back in 2011. Textbook and eTextbook are published under ISBN 0813129710 and 9780813129716. Since then Patricia Neal: An Unquiet Life textbook was available to sell back to BooksRun online for the top buyback price or rent at the marketplace.
Show more

The internationally acclaimed actress Patricia Neal has been a star on stage, film, and television for nearly sixty years. On Broadway she appeared in such lauded productions as Lillian Hellman's Another Part of the Forest, for which she won the very first Tony Award, and The Miracle Worker. In Hollywood she starred opposite the likes of Ronald Reagan, Gary Cooper, John Wayne, Paul Newman, Fred Astaire, and Tyrone Power in some thirty films. Neal anchored such classic pictures as The Day the Earth Stood Still, A Face in the Crowd, and Breakfast at Tiffany's, but she is perhaps best known for her portrayal of Alma Brown in Hud, which earned her the Academy Award for Best Actress in 1963. But there has been much, much more to Neal's life. She was born Patsy Louise Neal on January 20, 1926, in Packard, Kentucky, though she spent most of her childhood in Knoxville, Tennessee. Neal quickly gained attention for her acting abilities in high school, community, and college performances. Her early stage successes were overshadowed by the unexpected death of her father in 1944. Soon after she left New York for Hollywood in 1947, Neal became romantically involved with Gary Cooper, her married co-star in The Fountainhead, an attachment which brought them both a great deal of notoriety in the press and a great deal of heartache in their personal lives. In 1953, Neal married famed children's author Roald Dahl, a match that would bring her five children and thirty years of dramatic ups and downs. In 1961, their son, Theo, was seriously injured in an automobile accident and required multiple neurosurgeries and years of rehabilitation; the following year their daughter, Olivia, died of measles. At the pinnacle of her screen career, Patricia Neal suffered a series of strokes which left her in a coma for twenty-one days. Variety even ran a headline erroneously stating that she had died. At the time, Neal was pregnant with her and Dahl's fifth child, Lucy, who was born healthy a few months later. After a difficult recovery, Neal returned to film acting, earning a second Academy Award nomination for The Subject Was Roses. She appeared in a number of television movie roles in the 1970s and 1980s and won a Golden Globe for Best Actress in a Dramatic TV Movie in 1971 for her role in The Homecoming.

Patricia Neal: An Unquiet Life is the first critical biography detailing the actress's impressive film career and remarkable personal life. Author Stephen Michael Shearer has conducted numerous interviews with Neal, her professional colleagues, and her intimate friends and was given access to the actress's personal papers. The result is an honest and comprehensive portrait of an accomplished woman who has lived her life with determination and bravado.