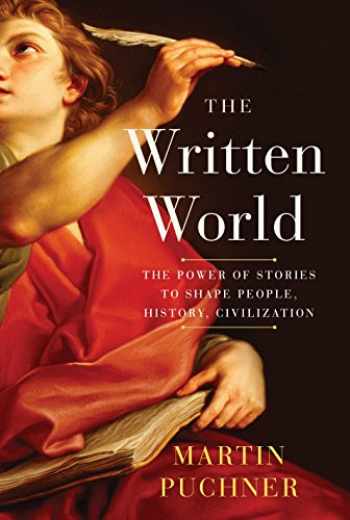 The Written World: The Power of Stories to Shape People, History, Civilization

The story of literature in sixteen acts—from Homer to Harry Potter, including The Tale of Genji, Don Quixote, The Communist Manifesto, and how they shaped world history

In this groundbreaking book, Martin Puchner leads us on a remarkable journey through time and around the globe to reveal the how stories and literature have created the world we have today. Through sixteen foundational texts selected from more than four thousand years of world literature, he shows us how writing has inspired the rise and fall of empires and nations, the spark of philosophical and political ideas, and the birth of religious beliefs.

We meet Murasaki, a lady from eleventh-century Japan who wrote the first novel, The Tale of Genji, and follow the adventures of Miguel de Cervantes as he battles pirates, both seafaring and literary. We watch Goethe discover world literature in Sicily, and follow the rise in influence of The Communist Manifesto. Puchner takes us to Troy, Pergamum, and China, speaks with Nobel laureates Derek Walcott in the Caribbean and Orhan Pamuk in Istanbul, and introduces us to the wordsmiths of the oral epic Sunjata in West Africa. This delightful narrative also chronicles the inventions—writing technologies, the printing press, the book itself—that have shaped people, commerce, and history. In a book that Elaine Scarry has praised as “unique and spellbinding,” Puchner shows how literature turned our planet into a written world.

Praise for The Written World

“It’s with exhilaration . . . that one hails Martin Puchner’s book, which asserts not merely the importance of literature but its all-importance. . . . Storytelling is as human as breathing.”—The New York Times Book Review

“Puchner has a keen eye for the ironies of history. . . . His ideal is ‘world literature,’ a phrase he borrows from Goethe. . . . The breathtaking scope and infectious enthusiasm of this book are a tribute to that ideal.”—The Sunday Times (U.K.)

“Enthralling . . . Perfect reading for a long chilly night . . . [Puchner] brings these works and their origins to vivid life.”—BookPage

“Well worth a read, to find out how come we read.”—Margaret Atwood, via Twitter
Show more