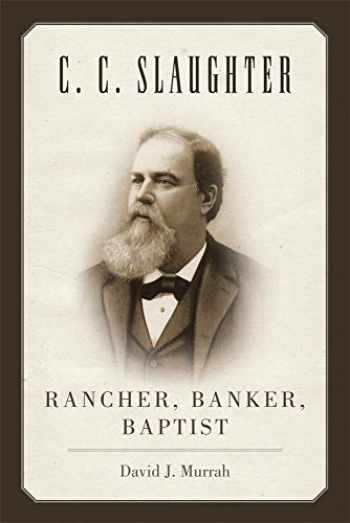 Born during the infant years of the Texas Republic, C. C. Slaughter (1837–1919) participated in the development of the southwestern cattle industry from its pioneer stages to the modern era. Trail driver, Texas Ranger, banker, philanthropist, and cattleman, he was one of America’s most famous ranchers. David J. Murrah’s biography of Slaughter, now available in paperback, still stands as the definitive account of this well-known figure in Southwest history.

A pioneer in West Texas ranching, Slaughter increased his holdings from 1877 to 1905 to include more than half a million acres of land and 40,000 head of cattle. At one time “Slaughter country” stretched from a few miles north of Big Spring, Texas, northwestward two hundred miles to the New Mexico border west of Lubbock. His father, brothers, and sons rode the crest of his popularity, and the Slaughter name became a household word in the Southwest. In 1873—almost ten years before the “beef bonanza” on the open range made many Texas cattlemen rich—C. C. Slaughter was heralded by a Dallas newspaper as the “Cattle King of Texas.” Among the first of the West Texas cattlemen to make extensive use of barbed wire and windmills, Slaughter introduced new and improved cattle breeds to West Texas.

In his later years, greatly influenced by Baptist minister George W. Truett of Dallas, Slaughter became a major contributor to the work of the Baptist church in Texas. He substantially supported Baylor University and was a cofounder of the Baptist Education Commission and Dallas’s Baylor Hospital.

Slaughter also cofounded the Texas Cattle Raisers’ Association (1877) and the American National Bank of Dallas (1884), which through subsequent mergers became the First National Bank. His banking career made him one of Dallas’s leading citizens, and at times he owned vast holdings of downtown Dallas property.