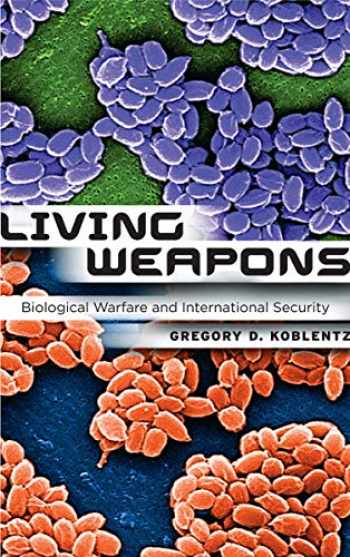 "Biological weapons are widely feared, yet rarely used. Biological weapons were the first weapon prohibited by an international treaty, yet the proliferation of these weapons increased after they were banned in 1972. Biological weapons are frequently called 'the poor man's atomic bomb,' yet they cannot provide the same deterrent capability as nuclear weapons. One of my goals in this book is to explain the underlying principles of these apparent paradoxes."―from Living Weapons

At a time when the United States enjoys overwhelming conventional military superiority, biological weapons have emerged as an attractive means for less powerful states and terrorist groups to wage asymmetric warfare. Koblentz also warns that advances in the life sciences have the potential to heighten the lethality and variety of biological weapons. The considerable overlap between the equipment, materials and knowledge required to develop biological weapons, conduct civilian biomedical research, and develop biological defenses creates a multiuse dilemma that limits the effectiveness of verification, hinders civilian oversight, and complicates threat assessments.

Living Weapons draws on the American, Soviet, Russian, South African, and Iraqi biological weapons programs to enhance our understanding of the special challenges posed by these weapons for arms control, deterrence, civilian-military relations, and intelligence. Koblentz also examines the aspirations of terrorist groups to develop these weapons and the obstacles they have faced. Biological weapons, Koblentz argues, will continue to threaten international security until defenses against such weapons are improved, governments can reliably detect biological weapon activities, the proliferation of materials and expertise is limited, and international norms against the possession and use of biological weapons are strengthened.