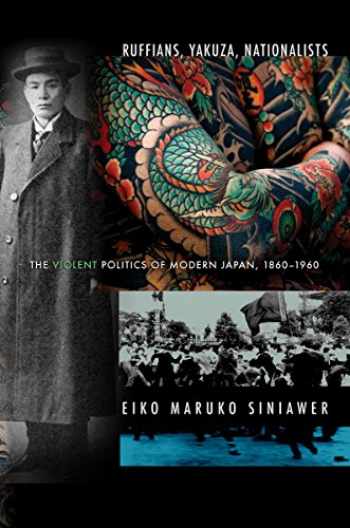 Violence and democracy may seem fundamentally incompatible, but the two have often been intimately and inextricably linked. In Ruffians, Yakuza, Nationalists, Eiko Maruko Siniawer argues that violence has been embedded in the practice of modern Japanese politics from the very inception of the country's experiment with democracy. As soon as the parliament opened its doors in 1890, brawls, fistfights, vandalism, threats, and intimidation quickly became a fixture in Japanese politics, from campaigns and elections to legislative debates. Most of this physical force was wielded by what Siniawer calls "violence specialists": ruffians and yakuza. Their systemic and enduring political violence-in the streets, in the halls of parliament, during popular protests, and amid labor strife-ultimately compromised party politics in Japan and contributed to the rise of militarism in the 1930s.

For the post-World War II years, Siniawer illustrates how the Japanese developed a preference for money over violence as a political tool of choice. This change in tactics signaled a political shift, but not necessarily an evolution, as corruption and bribery were in some ways more insidious, exclusionary, and undemocratic than violence.

Siniawer demonstrates that the practice of politics in Japan has been dangerous, chaotic, and far more violent than previously thought. Additionally, crime has been more political. Throughout the book, Siniawer makes clear that certain yakuza groups were ideological in nature, contrary to the common understanding of organized crime as nonideological. Ruffians, Yakuza, Nationalists is essential reading for anyone wanting to comprehend the role of violence in the formation of modern nation-states and its place in both democratic and fascist movements.