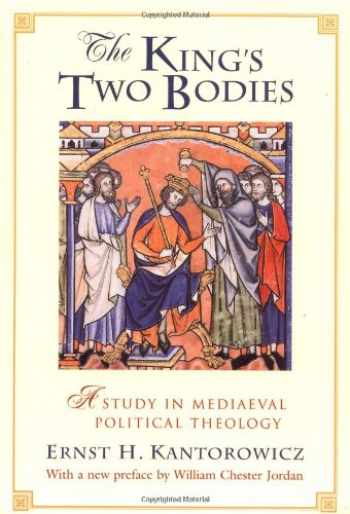 Acknowledged author Ernst H. Kantorowicz wrote The King's Two Bodies comprising 616 pages back in 1997. Textbook and eTextbook are published under ISBN 0691017042 and 9780691017044. Since then The King's Two Bodies textbook was available to sell back to BooksRun online for the top buyback price or rent at the marketplace.
Show more

In 1957 Ernst Kantorowicz published a book that would be the guide for generations of scholars through the arcane mysteries of medieval political theology. In The King's Two Bodies, Kantorowicz traces the historical problem posed by the "King's two bodies"--the body politic and the body natural--back to the Middle Ages and demonstrates, by placing the concept in its proper setting of medieval thought and political theory, how the early-modern Western monarchies gradually began to develop a "political theology.?

The king's natural body has physical attributes, suffers, and dies, naturally, as do all humans; but the king's other body, the spiritual body, transcends the earthly and serves as a symbol of his office as majesty with the divine right to rule. The notion of the two bodies allowed for the continuity of monarchy even when the monarch died, as summed up in the formulation "The king is dead. Long live the king."

Bringing together liturgical works, images, and polemical material, The King's Two Bodies explores the long Christian past behind this "political theology." It provides a subtle history of how commonwealths developed symbolic means for establishing their sovereignty and, with such means, began to establish early forms of the nation-state.

Kantorowicz fled Nazi Germany in 1938, after refusing to sign a Nazi loyalty oath, and settled in the United States. While teaching at the University of California, Berkeley, he once again refused to sign an oath of allegiance, this one designed to identify Communist Party sympathizers. He was dismissed as a result of the controversy and moved to the Institute for Advanced Study in Princeton, where he remained for the rest of his life, and where he wrote The King's Two Bodies.