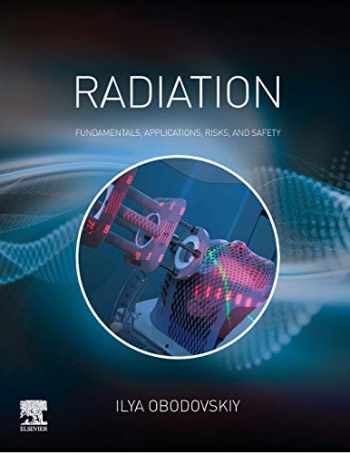 Acknowledged authors Obodovskiy, Ilya wrote Radiation: Fundamentals, Applications, Risks, and Safety comprising 720 pages back in 2019. Textbook and eTextbook are published under ISBN 0444639799 and 9780444639790. Since then Radiation: Fundamentals, Applications, Risks, and Safety textbook was available to sell back to BooksRun online for the top buyback price or rent at the marketplace.
Show more

The author is ready to assert that practically none of the readers of this book will ever happen to deal with large doses of radiation. But the author, without a shadow of a doubt, claims that any readers of this book, regardless of gender, age, financial situation, type of professional activity, and habits, are actually exposed to low doses of radiation throughout their life.

This book is devoted to the effect of small doses on the body. To understand the basic effects of radiation on humans, the book contains the necessary information from an atomic, molecular and nuclear physics, as well as from biochemistry and biology. Special attention is paid to the issues that are either not considered or discussed very briefly in existing literature. Examples include the ionization of inner atomic shells that play an essential role in radiological processes, and the questions of transformation of the energy of ionizing radiation in matter.

The benefits of ionizing radiation to mankind is reflected in a wide range of radiation technologies used in science, industry, agriculture, culture, art, forensics, and, what is the most important application, medicine. Radiation: Fundamentals, Applications, Risks and Safety provides information on the use of radiation in modern life, its usefulness and indispensability.

Experiments on the effects of small doses on bacteria, fungi, algae, insects, plants and animals are described. Human medical experiments are inhuman and ethically flawed. However, during the familiarity of mankind with ionizing radiation, a large number of population groups were subject to accumulation, exposed to radiation at doses of small but exceeding the natural background radiation.

This book analyzes existing, real-life radiation results from survivors of Hiroshima and Nagasaki, Chernobyl and Fukushima, and examines studies of radiation effect on patients, radiologists, crews of long-distant flights and astronauts, on miners of uranium copies, on workers of nuclear industry and on militaries, exposed to ionizing radiation on a professional basis, and on the population of the various countries receiving environmental exposure.

The author hopes that this book can mitigate the impact of radiation phobia, which prevails in the public consciousness over the last half century.