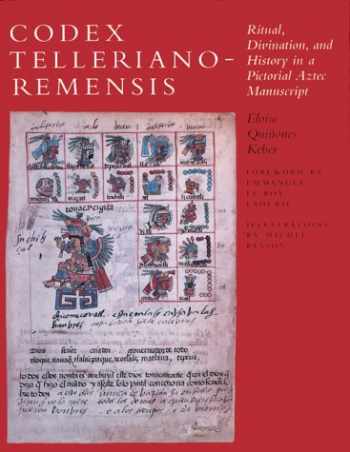 "In this magnificently illustrated work with a facsimile reproduction of the Codex Telleriano-Remensis, Eloise Quiñones Keber has presented an invaluable first-time publication of the entire codex along with an extensive scholarly commentary, sixteenth-century Spanish annotations, and an English translation of its texts.... This volume is highly recommended as an important acquisition for any research library on colonial Mexican history."

As one of the finest surviving examples of the art of Aztec manuscript painting, the Codex Telleriano-Remensis provides invaluable information about the core of Aztec culture. In this landmark publication, Eloise Quiñones Keber presents the first photographic color facsimile of the entire codex, accompanied by the most extensive commentary ever undertaken on its abundant images and Spanish annotations and the first English translation of its texts.

Produced in sixteenth-century colonial Mexico, the codex consists of a ceremonial calendar of the "months" of the year, a divinatory almanac featuring the deities that determined the fates of the days, and a history of the Aztecs from their legendary migration in the twelfth century through the first decades of Spanish occupation. Dr. Quiñones Keber's commentary offers new data and hypotheses regarding the physical features of the manuscript, its origins, dating, authorship, prototypes, Spanish influence, and relationship to its partial cognate, the Codex Vaticanus A.

Now owned by the Bibliothèque Nationale of Paris, the Codex Telleriano-Remensis offers a rare visual example of the cultural encounter between the "old" and "new" worlds as European practices mingled with indigenous traditions to produce an expression unique to its time and place. It is thus a key document for understanding not only ancient Mexico and New Spain but also the processes of cultural persistence and accommodation that shaped them both.