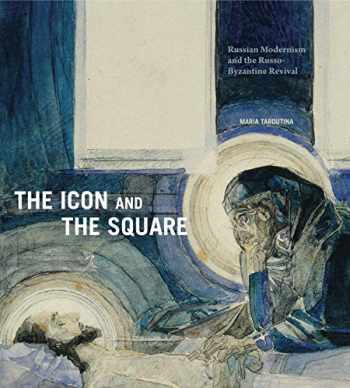 The Icon and the Square: Russian Modernism and the Russo-Byzantine Revival

In The Icon and the Square, Maria Taroutina examines how the traditional interests of institutions such as the crown, the church, and the Imperial Academy of Arts temporarily aligned with the radical, leftist, and revolutionary avant-garde at the turn of the twentieth century through a shared interest in the Byzantine past, offering a counternarrative to prevailing notions of Russian modernism.

Focusing on the works of four different artists—Mikhail Vrubel, Vasily Kandinsky, Kazimir Malevich, and Vladimir Tatlin—Taroutina shows how engagement with medieval pictorial traditions drove each artist to transform his own practice, pushing beyond the established boundaries of his respective artistic and intellectual milieu. She also contextualizes and complements her study of the work of these artists with an examination of the activities of a number of important cultural associations and institutions over the course of several decades. As a result, The Icon and the Square gives a more complete picture of Russian modernism: one that attends to the dialogue between generations of artists, curators, collectors, critics, and theorists.

The Icon and the Square retrieves a neglected but vital history that was deliberately suppressed by the atheist Soviet regime and subsequently ignored in favor of the secular formalism of mainstream modernist criticism. Taroutina’s timely study, which coincides with the centennial reassessments of Russian and Soviet modernism, is sure to invigorate conversation among scholars of art history, modernism, and Russian culture.