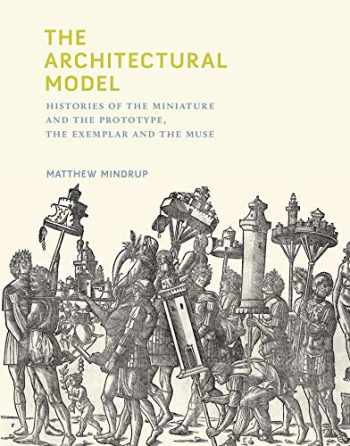 The Architectural Model: Histories of the Miniature and the Prototype, the Exemplar and the Muse (The MIT Press)

An investigation of different uses for the architectural model through history―as sign, souvenir, funerary object, didactic tool, medium for design, and architect's muse.

For more than five hundred years, architects have employed three-dimensional models as tools to test, refine, and illustrate their ideas. But, as Matthew Mindrup shows, the uses of physical architectural models extend beyond mere representation. An architectural model can also simulate, instruct, inspire, and generate architectural designs. It can be, among other things, sign, souvenir, toy, funerary object, didactic tool, medium, or muse. In this book, Mindrup surveys the history of architectural models by investigating their uses, both theoretical and practical.

Tracing the architectural model's development from antiquity to the present, Mindrup also offers an interpretive framework for understanding each of its applications in the context of time and place. He first examines models meant to portray extant, fantastic, or proposed structures, describing their use in ancient funerary or dedicatory practices, in which models are endowed with magical power; as a medium for architectural reverie and inspiration; and as prototypes for twentieth-century experimental designs. Mindrup then considers models that exemplify certain architectural uses, exploring the influence of Leon Battista Alberti's dictum that models be simple, lest they distract from the architect's ideas; analyzing the model as a generative tool; and investigating allegorical, analogical, and anagogical interpretations of models.

Mindrup's histories show how the model can be a surrogate for the architectural structure itself, or for the experience of its formal, tactile, and sensory complexity; and beyond that, that the manipulation, play, experimentation, and dreaming enabled by models allow us to imagine architecture in new ways.