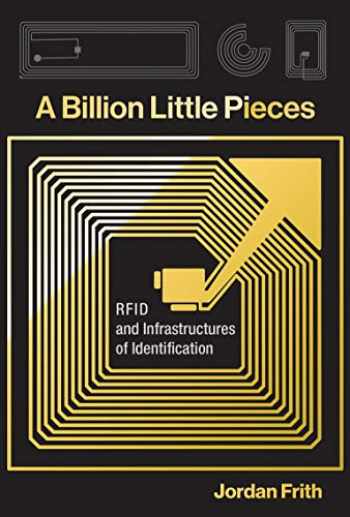 A Billion Little Pieces: RFID and Infrastructures of Identification

How RFID, a ubiquitous but often invisible mobile technology, identifies tens of billions of objects as they move through the world.

RFID (Radio Frequency Identification) is ubiquitous but often invisible, a mobile technology used by more people more often than any flashy smartphone app. RFID systems use radio waves to communicate identifying information, transmitting data from a tag that carries data to a reader that accesses the data. RFID tags can be found in credit cards, passports, key fobs, car windshields, subway passes, consumer electronics, tunnel walls, and even human and animal bodies―identifying tens of billions of objects as they move through the world. In this book, Jordan Frith looks at RFID technology and its social impact, bringing into focus a technology that was designed not to be noticed.

RFID, with its ability to collect unique information about almost any material object, has been hyped as the most important identification technology since the bar code, the linchpin of the Internet of Things―and also seen (by some evangelical Christians) as a harbinger of the end times. Frith views RFID as an infrastructure of identification that simultaneously functions as an infrastructure of communication. He uses RFID to examine such larger issues as big data, privacy, and surveillance, giving specificity to debates about societal trends.

Frith describes how RFID can monitor hand washing in hospitals, change supply chain logistics, communicate wine vintages, and identify rescued pets. He offers an accessible explanation of the technology, looks at privacy concerns, and pushes back against alarmist accounts that exaggerate RFID's capabilities. The increasingly granular practices of identification enabled by RFID and other identification technologies, Frith argues, have become essential to the working of contemporary networks, reshaping the ways we use information.