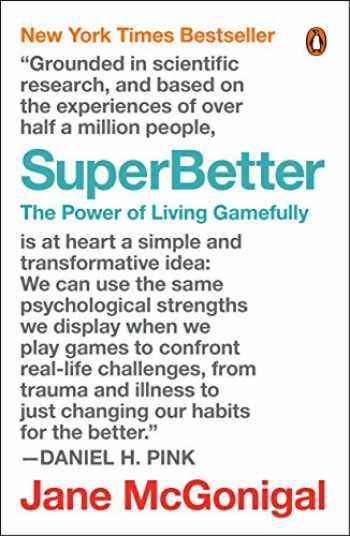 SuperBetter: The Power of Living Gamefully

Acknowledged authors McGonigal, Jane wrote SuperBetter: The Power of Living Gamefully comprising 480 pages back in 2016. Textbook and eTextbook are published under ISBN 0143109774 and 9780143109778. Since then SuperBetter: The Power of Living Gamefully textbook was available to sell back to BooksRun online for the top buyback price of $ 1.62 or rent at the marketplace.
Show more

An innovative guide to living gamefully, based on the program that has already helped nearly half a million people achieve remarkable personal growth

In 2009, internationally renowned game designer Jane McGonigal suffered a severe concussion. Unable to think clearly or work or even get out of bed, she became anxious and depressed, even suicidal. But rather than let herself sink further, she decided to get better by doing what she does best: she turned her recovery process into a resilience-building game. What started as a simple motivational exercise quickly became a set of rules for “post-traumatic growth” that she shared on her blog. These rules led to a digital game and a major research study with the National Institutes of Health. Today nearly half a million people have played SuperBetter to get stronger, happier, and healthier.

But the life-changing ideas behind SuperBetterare much bigger than just one game. In this book, McGonigal reveals a decade’s worth of scientific research into the ways all games—including videogames, sports, and puzzles—change how we respond to stress, challenge, and pain. She explains how we can cultivate new powers of recovery and resilience in everyday life simply by adopting a more “gameful” mind-set. Being gameful means bringing the same psychological strengths we naturally display when we play games—such as optimism, creativity, courage, and determination—to real-world goals.

Drawing on hundreds of studies, McGonigal shows that getting superbetter is as simple as tapping into the three core psychological strengths that games help you build:

• Your ability to control your attention, and therefore your thoughts and feelings
• Your power to turn anyone into a potential ally, and to strengthen your existing relationships
• Your natural capacity to motivate yourself and super-charge your heroic qualities, like willpower, compassion, and determination

SuperBetter contains nearly 100 playful challenges anyone can undertake in order to build these gameful strengths. It includes stories and data from people who have used the SuperBetter method to get stronger in the face of illness, injury, and other major setbacks, as well as to achieve goals like losing weight, running a marathon, and finding a new job.

As inspiring as it is down to earth, and grounded in rigorous research, SuperBetter is a proven game plan for a better life. You’ll never say that something is “just a game” again.