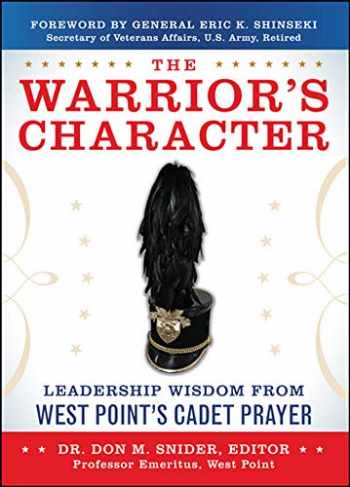 As one of America's most honored institutions, West Point has produced some of the greatest leaders in the history of the nation--and the world. For almost a century, West Point's men and women have been both informed and inspired by the "Cadet Prayer"--a simple but profound set of moral precepts for those who aspire to realize in their lives and work as leaders the ideals and principles of West Point.

Imagine if business had a similar compass for leadership . . .

Using the "Cadet Prayer" and the Academy's developmental model as a foundation, U.S. Army veteran and West Point professor Don M. Snider and his colleagues lay the groundwork for achieving leadership success in any business. Snider's assertion is this: In leadership, moral character comes first. Without it, skills, competence, and even vision are useless. Here are just a few of the leadership axioms from the "Cadet Prayer":

Honesty. Transparency. Loyalty. Service. These aren't "soft" traits. The're the nuts and bolts of quality leadership. They're the hallmark of authentic leadership for the sake of it. And they are the rock-solid foundation on which stand leadership success and all that comes with it.

"In leadership," Snider writes, "being precedes doing." This timeless truth is the first step toward leadership excellence in any walk of life. The Warrior's Character will take you the rest of the way.

West Point's nondenominational "Cadet Prayer" has instilled the values of moral leadership in its cadets for nearly 100 years. In The Warrior's Character, Retired U.S. Army Colonel Don Snider and his colleagues provide a look into West Point’s development of leaders of character through the moral precepts found in the prayer and the Army's seven primary, timeless values:

All added up, they form the foundation on which great leadership is built―in the military, in business, in life. The Warrior's Character provides the inspiration and knowledge you need to become the best leader possible. Embrace the lessons inside and lead your people and organization to greatness.