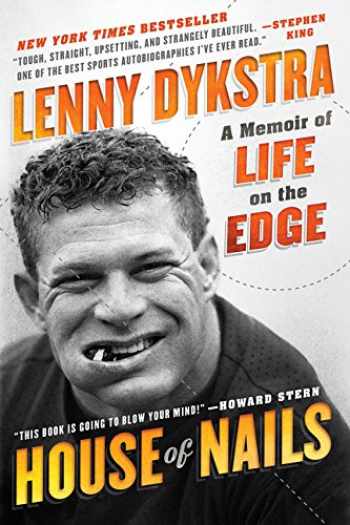 House of Nails: A Memoir of Life on the Edge

A TOP-TEN NEW YORK TIMES BESTSELLER! AN INSTANT CLASSIC OF HUSTLE AND EXCESS ...

"Tough, straight, upsetting, and strangely beautiful. ONE OF THE BEST SPORTS AUTOBIOGRAPHIES I’VE EVER READ. It comes from the heart." — Stephen King

“THIS BOOK IS GOING TO BLOW YOUR MIND! Obviously everyone has to buy it.” — Howard Stern

Eclipsing the traditional sports memoir, House of Nails, by former world champion, multimillionaire entrepreneur, and imprisoned felon Lenny Dykstra, spins a tragicomic tale of Shakespearean proportions -- a relentlessly entertaining American epic that careens between the heights and the abyss.

Nicknamed "Nails" for his hustle and grit, Lenny approached the game of baseball -- and life -- with mythic intensity. During his decade in the majors as a center fielder for the legendary 1980s Mets and the 1990s Phillies, he was named to three All-Star teams and played in two of the most memorable World Series of the modern era. An overachiever known for his clutch hits, high on-base percentage, and aggressive defense, Lenny was later identified by his former minor-league roommate Billy Beane as the prototypical "Moneyball" player in Michael Lewis's bestseller. Tobacco-stained, steroid-powered, and booze-and-drug-fueled, Nails also defined a notorious era of excess in baseball.

Then came a second act no novelist could plausibly conjure: After retiring, Dykstra became a celebrated business mogul and investment guru. Touted as "one of the great ones" by CNBC's Jim Cramer, he became "baseball's most improbable post-career success story" (The New Yorker), purchasing a $17.5-million mansion and traveling the world by private jet. But when the economy imploded in 2008, Lenny lost everything. Then the feds moved in: convicted of bankruptcy fraud (unjustly, he contends), Lenny served two and a half harrowing years in prison, where he was the victim of a savage beating by prison guards that knocked out his front teeth.

The Daily Show's Jon Stewart, channeling the bewildered fascination of many observers, declared that Lenny's outrageous rise and spectactular fall was "the greatest story that I have ever seen in my lifetime."

Now, for the first time, Lenny tells all about his tumultuous career, from battling through crippling pain to steroid use and drug addiction, to a life of indulgence and excess, then, an epic plunge and the long road back to redemption. Was Lenny's hard-charging, risk-it-all nature responsible for his success in baseball and business and his precipitous fall from grace? What lessons, if any, has he learned now that he has had time to think and reflect?