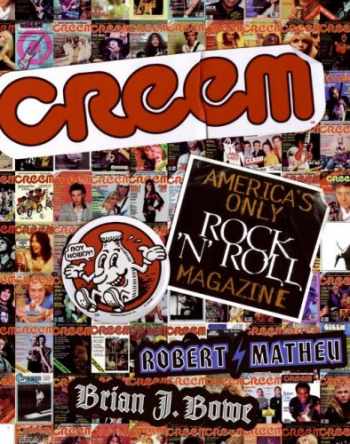 With raw photographs of rock's greatest stars and insightful prose by the legendary rock journalists who were stars in their own right, CREEM magazine stood at the forefront of youth counterculture from 1969 to 1988 as "America's Only Rock 'n' Roll Magazine." A product of Detroit's revolutionary counterculture, CREEM cultivated an incredibly gifted staff of iconoclastic scribes, editors, photographers, and graphic artists whose work continues to resonate today, including: Lester Bangs, Dave Marsh, Richard Meltzer, Nick Tosches, and a not-so-famous Cameron Crowe. They invented a raucous new form of journalism, where the writing and photographs were as much an expression of rock 'n' roll as the music itself. CREEM embraced and abused the best and the worst of the era: MC5, Led Zeppelin, the Rolling Stones, the Faces, Lou Reed, the Stooges, T.Rex, Kiss, Mott the Hoople, the Who, the New York Dolls, Bob Seger, Ted Nugent, Aerosmith, the Ramones, Cheap Trick, the Clash, and Van Halen, among many others.

Now the Mouth of the Motor City presents a retrospective of the beautiful haze that was rock's golden age—from the end of the hippie days through glam and punk and into '80s metal. Featuring the best of the magazine's vast archives of photos, illustrations, and articles, CREEM is the authentic rock 'n' roll experience—written for fanatics by fanatics.