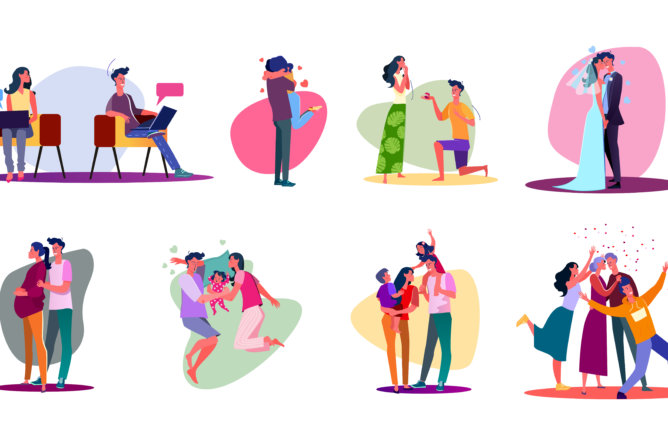 “It doesn’t mean that we’re always looking for more or that we’re greedy. There’s a lot of people that have great ideas and dreams and whatnot, but unless you’re willing to work really, really hard, and work for what you want, it’s never going to happen. And that’s what’s so great about the girls. It’s all about their work ethic.”

The Kardashians… how many times a day do we hear or we read the news about the members of this clan?  Such extensive media presence is partly due to a large family of theirs  – the momager (from “mom-manager”) Kris Jenner, her 5 girls, her son and all their kids and boyfriends, husbands and girlfriends. How many people does that make in total? More than 20 people in this sprawling family and there are more on the way! No wonder, we get to read about their life and drama all the time! At the same time, there is more to that: now the Kardashian-Jenner family is a brand. The family is even called “America’s Royal Family” in Ian Halperin’s Kardashian Dynasty.

And Kris Jenner is a branding and business wizard behind it! This has become crystal clear now, 12 years after the launch of the Reality TV show “Keeping up with the Kardashians” when every single member of the family is at least a millionaire. Moreover, Kylie Jenner was officially named by Forbes in 2018 as the youngest self-made billionaire in the world when she was not even 21. So just you understand: she has become a billionaire at the age of 20 — earlier than Mark Zuckerberg!

It looks like the super-mom Kris knows how to direct the lives and businesses of all the closest and extended members of the Kardashian family: she is behind all the endorsements of her 6 kids, perfectly aware of what to post on Instagram to maximise likes and which content to create for Snapchat. No matter what you throw at her, she will make sure to turn it into profit. Look how she reacted when the sex-video of Kim Kardashian and her then-boyfriend Ray-J leaked in 2007? She saw an opportunity in this sudden media interest to their family and came up with a reality TV idea “Keeping up with the Kardashians” which she successfully pitched to the producer Ryan Seacrest.

What about the recent rumours circulating about the alleged infidelity of Khloe Kardashian’s boyfriend, the N.B.A. player Tristan Thompson, with Jordyn Woods, best friend of Kylie Jenner? Jordyn was that close to Kylie so that she would live together with the family and Kylie would name several products in her makeup empire in Jordyn’s honour.  So just a couple of days after the speculation about the affair, Kardashian fans could notice on the website of the Kylie Cosmetics that the price for the Jordy Lip Kit dropped down from $27 to $13.50. Despite certain angry reviews left for the product like “Be mindful of the shade as wearing it may lead to biting the hand that feeds you”, it sold out almost immediately. It also led to a big spike in sales of other Kylie Cosmetics products. Such an approach is emblematic of the thought-through business ecosystem established by Kris Jenner: despite the relationship problems of Khloe and arguments between Kylie and Jordan which were aired in full details on the 16th season of their popular reality TV show, this turmoil only drives media interest in the TV show, attracts a growing number of sponsorships and stimulates sales of their signature products. No wonder that with so many things to do Kris Jenner stays up till 3am to finish all the press kits and she needs personal assistants to help her with all the tasks she has to accomplish:

“I guess if I get a little weird about something that isn’t the way I want it, and I complain, then it’s called controlling.”

As a self-starter, strong-willed and with good organisational skills, no wonder that Kris Jenner has become the powerhouse who successfully brought her large family to the limelight worldwide. It all started when her first marriage to a celebrity lawyer and businessman Robert Kardashian collapsed due to her dalliance. She had been used to opulent life and then suddenly all her credit cards were cancelled by her soon-to-be ex-husband. Not very long after this event, she was set up on a blind date with Bruce Jenner, an Olympic gold medal-winning decathlete, and accepted his proposal to get married one month after her divorce was finalised. This time there was no high income in the family and Kris had to start thinking about how to afford private schools for all her kids who got used to having everything they wanted to have. Bruce Jenner just started out working as a motivational speaker so he did not have that many commissions and those that he had were rather small and did not bring substantial sums of money into the household. That is when Kris decided to step in and become Bruce’s manager: she spotted early on that he was a great presenter, that people would cry and sympathize with the things he said. At the same time, he needed someone who would promote his gift and would connect him with potential audiences.

Kris Jenner coped with this task brilliantly: she would stay up till 3am every day making sure that all the brochures and press kits are beautifully designed and sent on time — and the first results did not wait too long to appear.

Kris Jenner’s life rules about working hard and being passionate about the things she is doing served her very well both in bringing up her 6 kids as well as in her business ventures. She has been known as a control freak for a long time: once she has set up her mind on something, sooner or later she will persistently achieve all her goals. Check in this video the 10 rules of Kris Jenner that led her to become who she is now:

As a “momager” of 6 successful entertainment industry stars, she can give a master class on how to monetize social media presence. Together with her family, she transformed our usual perception of certain products like diet drinks, designer bags as well as the way they can be advertised and sold to us. Paid Instagram posts have become one of the main sources of income for this family. The Kardashian sisters dominate the sneaker industry getting multi-million endorsements with Adidas, Puma and Nike (through Kanye West’s collaborations as well). They have reached such a powerful media level so that Kim Kardashian with her 137m Instagram followers can easily charge $1 million dollars for advertising on her Instagram account. Kylie Jenner, who has 134m followers, has a significant impact on the digital markets as well: her tweet “Sooo does anyone else not open Snapchat anymore? Or is it just me … ugh, this is so sad” cost Snapchat $1.3 billion in lost value.

The Kardashian empire offers something for everyone. If you are interested in body positivity, then you should try Khloe’s Good American jeans. If you are having a “busy mum” lifestyle then you will be interested in the beauty and wellness website Poosh launched by Kourtney. The younger generation of girls in this famous family, Kendall and Kylie, have become the true idols for their young fan base. Kylie’s entirely self-owned lip kit cosmetic business, launched in 2015, is now worth $900 million. She became really successful after coming up with an idea to produce lip contours of the same colour as the lipsticks. Kendall has always dreamed of becoming a top-model and in 2017 she was named as the highest-paid working model earning $22 million. Together the sisters run a clothing line called Kendall + Kylie which specialises in oversize camouflage jackets. Rob Kardashian has a few ventures of his own as well including a line of novelty socks. The family has nailed the fashion business — learn more about it with fashion design books.

Most of these products can be bought exclusively online which means that the family does not have running marketing costs due to the massive presence on various social media channels. For example, during the first 5 minutes when Kim launched her KKW Beauty Line in 2017, she sold 300,000 items of products worth $14.4 million.

Therefore, all the Kardashian-Jenner’s current success is based on their mother’s reality TV show “Keeping up with Kardashians”. This explains why the family members are recognised worldwide and why there are millions of followers interested in the Kardashian news. And what is certain is that this family does not stint on the news. Let’s remember these countless speculations about Kris’ and Kylie Jenner’s age, Kim’s weight, her relationship with Kanye West, their youngest baby Chicago West and the 4th baby on the way through surrogate mother, Kanye West’s health issues, whether Kendall has a boyfriend, rift between Khloe and the father of her baby Tristan, 3 babies for Kim, Khloe and Kylie born almost at the same time, and of course the leader of all the news  – transformation of Bruce Jenner into Caitlyn Jenner. Such a consistent newsfeed explains why people are craving to know what happens in this family, that is why they follow Instagram of Kourtney Kardashian or Khloe’s Twitter. In return, this gives an answer to how Kendall Jenner managed to earn $26.5 million for just 53 sponsored Instagram posts (when at college, we can only dream about these heaps of cash, but there are still several solid ways to earn money for students too). Kardashians’ popularity in the news and their earnings are very much correlated – and the momager understands it better than anyone else. At the same time, Kris Jenner is first of all a mom for her kids and she helps to make their dreams come true. Like any other parent would do, she helped her daughter Kylie at the age of 15 to trademark the idea for matching lip gloss and liners. When confronted with the debate about her self-made fortune, Kylie honestly said :

“I can’t say I’ve done it by myself. If they’re just talking finances, technically, yes, I don’t have any inherited money. But I have had a lot of help and a huge platform.”

Despite being a busy mom, Kris Jenner has never forgotten about herself. She takes 10% cuts as a manager from every commission that her kids receive (for which she has been a lot of times negatively reviewed in the media) and she is a millionaire in her own right. At 63, Kris is probably one of the most immaculately dressed grandmothers in America. She has an active lifestyle: together with her boyfriend Corey Gamble they go out to different Hollywood events and premieres and meet lots of fancy people. With the appearance of a new generation in the family – her grandchildren, she is probably thinking at the same time which ideas to pitch to these people to help her grandchildren grow up in a stable environment with money and contracts secured in the future. Most of the children have already started their lives onscreen in KUWTK which means that we will hear lots of Kardashian family news in the future which according to Kris Jenner’s business plan will ensure the success of all other entrepreneurial projects of the clan.

Check out Kris Jenner’s answers to Ellen DeGeneres “burning questions” regarding the specific talents of her family members: