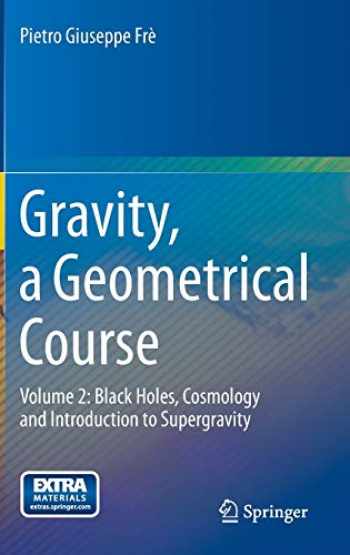 ‘Gravity, a Geometrical Course’ presents general relativity (GR) in a systematic and exhaustive way, covering three aspects that are homogenized into a single texture: i) the mathematical, geometrical foundations, exposed in a self consistent contemporary formalism, ii) the main physical, astrophysical and cosmological applications, updated to the issues of contemporary research and observations, with glimpses on supergravity and superstring theory, iii) the historical development of scientific ideas underlying both the birth of general relativity and its subsequent evolution. The book is divided in two volumes.

Volume Two is covers black holes, cosmology and an introduction to supergravity. The aim of this volume is two-fold. It completes the presentation of GR and it introduces the reader to theory of gravitation beyond GR, which is supergravity. Starting with a short history of the black hole concept, the book covers the Kruskal extension of the Schwarzschild metric, the causal structures of Lorentzian manifolds, Penrose diagrams and a detailed analysis of the Kerr-Newman metric. An extensive historical account of the development of modern cosmology is followed by a detailed presentation of its mathematical structure, including non-isotropic cosmologies and billiards, de Sitter space and inflationary scenarios, perturbation theory and anisotropies of the Cosmic Microwave Background. The last three chapters deal with the mathematical and conceptual foundations of supergravity in the frame of free differential algebras. Branes are presented both as classical solutions of the bulk theory and as world-volume gauge theories with particular emphasis on the geometrical interpretation of kappa-supersymmetry. The rich bestiary of special geometries underlying supergravity lagrangians is presented, followed by a chapter providing glances on the equally rich collection of special solutions of supergravity.

Pietro Frè is Professor of Theoretical Physics at the University of Torino, Italy and is currently serving as Scientific Counsellor of the Italian Embassy in Moscow. His scientific passion lies in supergravity and all allied topics, since the inception of the field, in 1976. He was professor at SISSA, worked in the USA and at CERN. He has taught General Relativity for 15 years. He has previously two scientific monographs, “Supergravity and Superstrings” and “The N=2 Wonderland”, He is also the author of a popular science book on cosmology and two novels, in Italian.