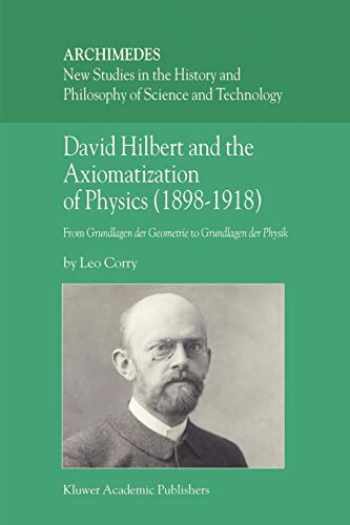 David Hilbert (1862-1943) was the most influential mathematician of the early twentieth century and, together with Henri Poincaré, the last mathematical universalist. His main known areas of research and influence were in pure mathematics (algebra, number theory, geometry, integral equations and analysis, logic and foundations), but he was also known to have some interest in physical topics. The latter, however, was traditionally conceived as comprising only sporadic incursions into a scientific domain which was essentially foreign to his mainstream of activity and in which he only made scattered, if important, contributions.

Based on an extensive use of mainly unpublished archival sources, the present book presents a totally fresh and comprehensive picture of Hilbert’s intense, original, well-informed, and highly influential involvement with physics, that spanned his entire career and that constituted a truly main focus of interest in his scientific horizon. His program for axiomatizing physical theories provides the connecting link with his research in more purely mathematical fields, especially geometry, and a unifying point of view from which to understand his physical activities in general. In particular, the now famous dialogue and interaction between Hilbert and Einstein, leading to the formulation in 1915 of the generally covariant field-equations of gravitation, is adequately explored here within the natural context of Hilbert’s overall scientific world-view.

This book will be of interest to historians of physics and of mathematics, to historically-minded physicists and mathematicians, and to philosophers of science.