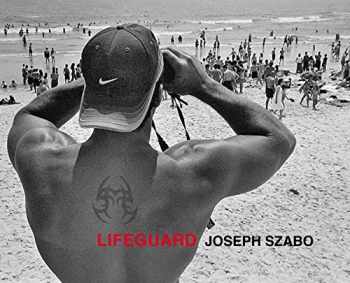 Camaraderie and community on Jones Beach

In the late 1960s, the photographer and photography teacher Joseph Szabo first discovered Jones Beach state park in Nassau County, New York. Since then, Szabo has struck up friendships with the lifeguards on duty at what is surely among the busiest beaches in the world, finding them as fascinating as the bodies they watch over. Restful and alert, solitary and part of a team, aloof and involved, the lifeguard is a unique character and a local celebrity on the beach.

Joseph Szabo: Lifeguard documents the photographer’s encounters and friendships with the Jones Beach lifeguards in photographs taken between 1990 and 2015. Portraits in the most expansive sense of the word, the images in this volume illustrate the day-to-day preparation, teamwork, relaxation, camaraderie, duty and responsibility in the lives of these figures that Szabo has come to know and respect.

A sensitive and wry observer, Joseph Szabo (born 1944) has been called the “quintessential photographer of the teenager.” He is best known for his photographs of adolescents taken in and around the halls of Malverne High School in Long Island, where he taught photography from 1972 to 1999, which were published in the photobook classic Teenage (Greybull, 2003). Turning his camera on his students to get their attention, Szabo captured the anxiety and bravado of the American teenager in classic documentary style black-and-white photographs that quickly attained cult status in the fashion world.