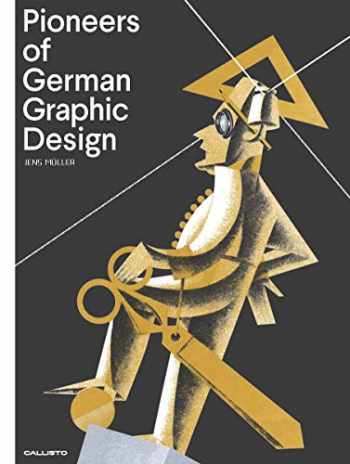 The beginning of minimalism: The fascinating story of German graphic design of the early 20th century

Pioneers of German Graphic Design tells the story of German graphic design in all its detail, from the late monarchy to the Wirtschaftswunder after World War II. Author Jens Müller, an expert in the field, explores the circumstance that led to the groundbreaking inventions of Germany's graphic design pioneers in an era of tumultuous politics and rapid social and economic change, shedding light not only on the development of the profession but on its international influence. Müller's analysis reveals that aesthetic principles of reduction and minimalism were introduced long before the foundation of the famous Bauhaus in 1919.

Peter Behrens created the world's first comprehensive corporate design for AEG as early as 1907, designing everything from the corporate logo to products, showrooms and even headquarter and production buildings. Other innovators soon followed: Lucian Bernhard prompted a revolution in poster design, Wilhelm Deffke and Karl Schulpig invented the modern logo, Herbert Bayer expanded the language of form at the Bauhaus, Jan Tschichold promoted a new typographic style and John Heartfield introduced photomontage as a means of visual communication. They were all caught up in a spirit of enthusiasm and opportunity which swept across Germany, and especially Berlin, in the early decades of the 20th century.

Alongside the vivid depiction of these milestones of graphic design the book analyzes how German zeitgeist had turned from emotional Expressionism to the matter-of-fact New Objectivity and how German modernist design subsequently became internationally recognized and had a significant influence on design movements in Western Europe and the United States.

Apart from reproducing more than 1,000 iconic designs in magnificent quality, this volume exhibits a great diversity of important unpublished or forgotten pieces. It presents the inspirational stories of fourteen graphic designers who essentially shaped the modern profession and established a visual language that changed our aesthetic perception forever.