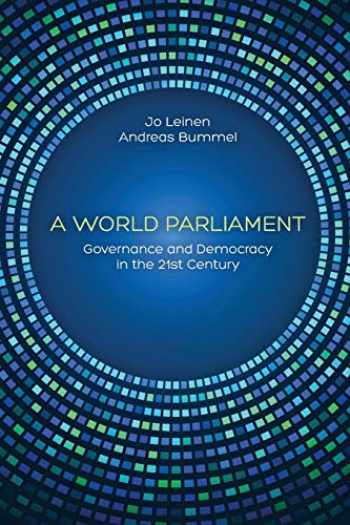 A World Parliament: Governance and Democracy in the 21st Century

More than at any time in history, all the people in the world are linked together in a shared civilization, encompassing the entire planet. Their multiple interconnections generate mutual dependencies and affinities. Humanity now has a common destiny. Global challenges such as war, poverty, inequality, climate change and environmental destruction are overwhelming nation-states and today’s international institutions. Doing the right thing requires more than having the right policies; it requires having the right political structures to implement them.

Following the emergence of democracy in the ancient Greek city states and its expansion to the modern territorial states in the 18th century, the next step is now imminent. Achieving a peaceful, just and sustainable world requires an evolutionary leap forward to a federal global government. The creation of a democratic world parliament is the centrepiece of this project. Against the backdrop of the problem of modernity, this book sheds light on the history, contemporary relevance and future implementation of this monumental idea.

The first part of this book explores the philosophical foundations of cosmopolitanism and a world parliament since ancient times and fills a gap by tracing the history of the idea and of the attempts to bring it about from the French Revolution to the present day.

The second part sets the issue in the context of global challenges such as climate change and planetary boundaries, the management of public goods, the stability of the financial system, combating tax evasion, terrorism and organized crime, disarmament, and protecting human rights. The construction of global democracy also plays a decisive role in combating hunger, poverty and inequality and in global water policy. Rapid developments in the fields of bio- and nanotechnology, robotics and artificial intelligence are giving rise to fundamental questions that humanity is not institutionally prepared for.

There is an overarching narrative that describes the dysfunctions and failings of today’s international order. At the same time, the alternative of a democratic world order and its underlying principles is presented in detail. The authors stress that there is a right to democracy that applies not only to the national but also to the global level. Against the backdrop of the power structures of the transnational elite, the book argues for the implementation of a new global class compromise and traces the long-term development of a planetary consciousness and global solidarity.

The third part discusses a possible path and scenarios towards the realization of a world parliament and the transition to a democratic world order.

‘This outstanding and comprehensive study is the new standard work on the idea of a world parliament, one that has been lacking for a long time.’
—Frank Biermann, Professor of Global Sustainability Governance at the University of Utrecht

‘An important and excellent book. The efforts for a world parliament enjoy my full support.’
—Jean Ziegler, former Professor at the University of Geneva and the Sorbonne, Paris

‘A seminal contribution to the discussion on a world parliament and world governance.’
—Andrew Strauss, Dean and Professor of Law at the University of Dayton School of Law

‘A bold, articulate, competent and courageous view on the evolution of world politics and, more importantly, what is needed to achieve humane governance.’
—Daniele Archibugi, Italian National Research Council, Rome, and Birkbeck College, University of London

‘This timely book outlines a logical roadmap towards a framework for global dialogue, deliberation, and decision-making which is now more urgent than ever.’
—Tim Murithi, Institute for Justice and Reconciliation, Cape Town